UNA: The union for Alberta’s nurses

Working for improvements for nurses, our profession, our patients, our residents and clients, and all Albertans.

United Nurses of Alberta is the union for more than 30,000 Registered Nurses, Registered Psychiatric Nurses and allied workers in Alberta.

Since 1977, UNA has been an effective advocate for nurses, the nursing profession and Canada’s fair and efficient public health care system.

UNA represents nurses in bargaining, in their profession, and in disputes with employers and professional licensing bodies.

What UNA does for nurses

UNA provides a wide range of services to its members. A key role is negotiating the excellent collective agreements that regulate salaries, benefits, schedules and working conditions of members.

How UNA is financed

UNA is financed by all of us, members who benefit from UNA’s collective agreements. Each of us pays 1.5 per cent of our gross monthly income in tax-deductible union dues. Budgets are subject to approval by democratically elected delegates to the Annual General Meeting.

When they start to work at a UNA worksite, most nurses sign a membership card as soon as possible. This gives them to vote on important matters and influence the direction of their union.

Those who choose not to join still have to pay dues, because the courts in Canada have determined all employees in workforce benefit from their union’s collective agreements, and achievements. In return, the union is legally responsible for providing fair representation for everyone in the workforce, members and non-members alike.

Bargaining collective agreements UNA’s most important job. This is because the agreements we negotiate with employers govern the pay, benefits and working conditions of all UNA members.

A collective agreement is a legally binding contract between a union, negotiating on behalf of a group of employees, and an employer. Typically, collective agreements set out such things as wages, scheduling rules, overtime pay, sick leave, job security, benefits and other employee rights.

Since it was founded, UNA has negotiated collective agreements that have greatly improved salaries, benefits and workplace conditions for all members. UNA has more than quintupled the wages of Alberta nurses since it was founded. In 1977, a new nurse earned only $6.28 an hour!

Before the expiry date of any UNA collective agreement, affected members can attend “demand setting meetings” at which the locals determine their bargaining proposals.

This is the process through which UNA’s members democratically decide their priorities in bargaining. UNA’s negotiating committees, the people who actually meet with the employer’s representatives at the bargaining table, are made up of working members of the union, elected by their co-workers to represent them.

UNA members vote on their agreements

No UNA agreement takes effect before the members whose working lives it governs have the opportunity to discuss and ratify it in a democratic vote. Province-wide agreements like the contract with Alberta Health Services must be subject to a vote of all affected and must be passed by a majority of both members and locals.

Are strikes by nurses legal?

Strikes by and community nurses were illegal in Alberta for many years. In 2015, a ruling of the Supreme Court of Canada declared blanket bans on strikes unconstitutional. So, in 2016, the Alberta Government passed essential services legislation that struck a reasonable balance between the right to strike and the need to safeguard services whose disruption could result in threats to life, personal safety or public health. The new law establishes a process through which employers and unions determine which workers provide essential services and how to deliver them during a strike. UNA recognizes the right to strike is a last resort when all other attempts to obtain a fair collective agreement have failed. Before any strike is called, both the majority of members and the majority of locals involved must vote in of the strike. 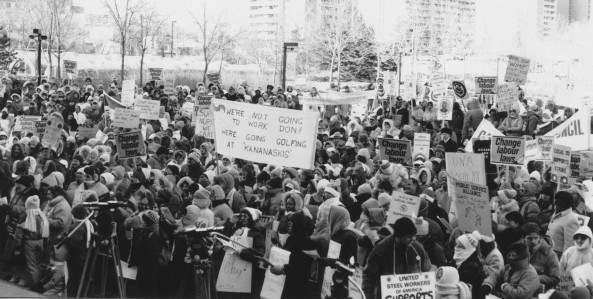 Dressed like arctic explorers in parkas and scarves, they braced themselves for a cold and desolate winter on the prairies. For the next 19 days, a group of brave union members fought an unreasonable employer and the most brutal deep freeze in years for their right to a fair collective...[more]