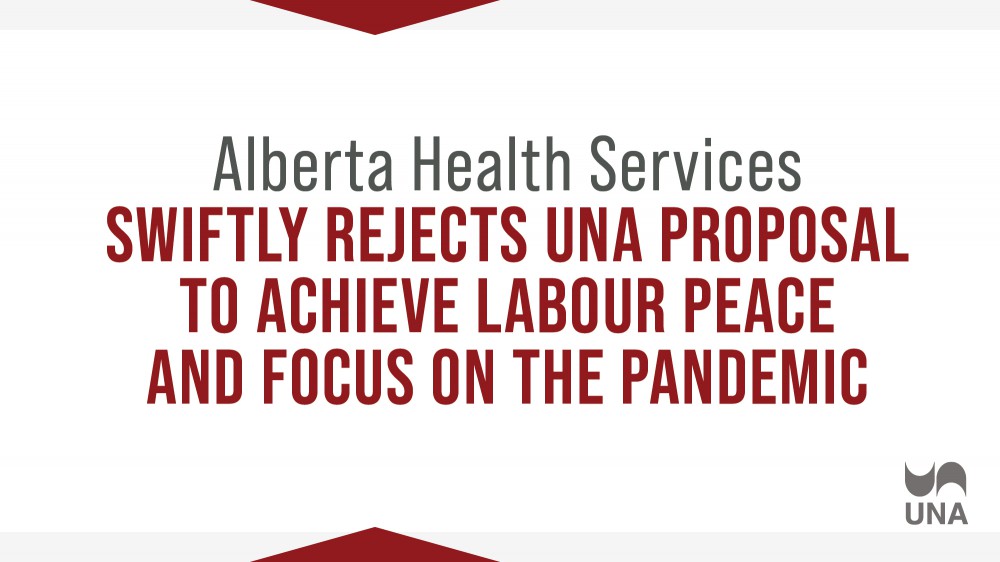 UNA urgently called on employers to quickly negotiate a contract in order to achieve labour peace, stabilize the Alberta workforce, and focus on responding to the pandemic.

But while AHS negotiators continued to press for a delay in bargaining, they refused to agree to two important issues facing the workforce:

“Clearly AHS and this government are more intent on pursing their agenda of rollbacks and reducing the workforce, even during a pandemic, than assuring a stable workforce to respond to the needs of Albertans,” said UNA President Heather Smith.

“Despite our efforts to inform them, they appear to want to exacerbate the exhausting and unsafe staffing situations nurses confront every shift they work,” she said. “The fear and devastated morale of the workforce is irrelevant to them.”

As a result of the employer’s immediate rejection of the UNA proposal, she said, the UNA negotiations team cannot agree to pause negotiations until March 31, 2021. “The next scheduled bargaining dates are December 14 and 15,” she said. “The UNA team has made it clear we are available to meet at any time, including weekends.”

“With the assurance of stability in other provinces, we are very concerned we will face increasing workforce deficits as Registered Nurses and Registered Psychiatric Nurses who are threatened with massive rollbacks and job insecurity in Alberta seek employment elsewhere,” she said earlier in the day.