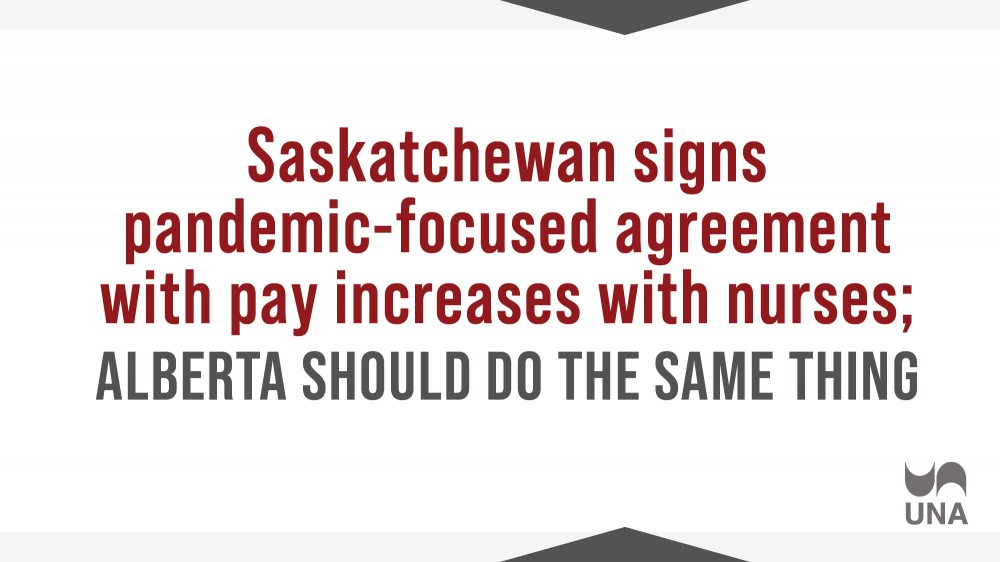 The Saskatchewan government and Saskatchewan Union of Nurses announced this morning they have reached tentative agreement on a new contract that emphasizes the need to confront the COVID-19 pandemic and provide pay increases for members.

In light of the agreement in Saskatchewan today, United Nurses of Alberta President Heather Smith has called on Alberta employers to quickly negotiate a similar contract with the goals of achieving labour peace and stabilizing the Alberta workforce so that everyone can focus on the response to the pandemic.

Full details of the Saskatchewan agreement will not be released until it has been ratified by members and employers, but SUN President Tracy Zambory confirmed the deal includes a pay raise and said it will give nurses “much-needed stability and security in the face of a global pandemic.”

Saskatchewan Health Minister Paul Merriman praised the union and employer bargaining teams for their “collaborative efforts and dedication” in reaching the agreement. He said in a statement the agreement will provide “further stability as our health system faces this pandemic.”

Smith said the UNA Negotiating Committee has been in conversations with Alberta Health Service bargaining representatives for the past several days.

“As the impact of COVID-19 continues to escalate across the province, and in light of the settlement that was reached between the Saskatchewan Union of Nurses and employers in that province today, we no longer accept that AHS and the other employers who are part of UNA’s Provincial Collective Agreement are unable to bargain,” Smith said.

Smith also noted that B.C. signed a three-year contract last year with public sector nurses that included pay increases of 2 per cent in each year and agreement to fill hundreds of positions that had been left vacant.

“With the assurance of stability in the provinces bordering Alberta, we are very concerned we will face increasing workforce deficits as Registered Nurses and Registered Psychiatric Nurses who are threatened with massive rollbacks and job insecurity in Alberta seek employment elsewhere,” she said. “We believe it is imperative the employers immediately address the needs of UNA members and bring stability to the Alberta workforce.”

In order to achieve labour peace and to stabilize the Alberta workforce at this crucial time in the pandemic, Smith said the UNA Negotiating Committee this morning tabled a Memorandum of Settlement with the employers.