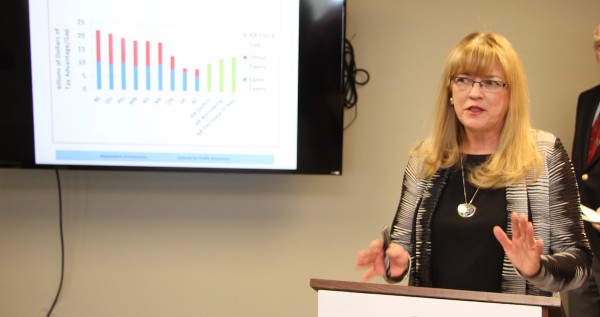 “To ensure essential public services, including equitable and accessible health care, are there when Albertans need them, our province must develop sustainable revenues that are not subject to the whims of international commodity markets,” Smith said.

“If you think the system is struggling now, just wait, it’ll get much, much worse,” said Parker, whose union represents medical professionals who are not nurses or physicians, such as pharmacists, psychologists and paramedics. “If you want the ambulance to be there when you call … if you need health care now, we need revenue reform now!”

Public Interest Alberta launched the campaign in hopes of encouraging a public conversation about how to the province’s revenue stream could be renovated to solve the problem of continuing revenue shortages caused by reliance on non-renewable resource revenues in a time of low commodity prices.

“We want all Albertans to have these conversations with their friends, families, neighbours and coworkers,” said PIA Executive Director Joel French.

Alberta voters need to insist that all the province’s political parties outline the details of their planned solutions to the province’s fiscal problem well before the 2019 provincial election, French added. “Will they make massive cuts to our public services? If so, which ones? What will the effect be on Albertans in our classrooms, hospitals and seniors’ homes?”

The Revenue Reno campaign includes an animated video that, with other information, can be found at RevenueReno.ca.