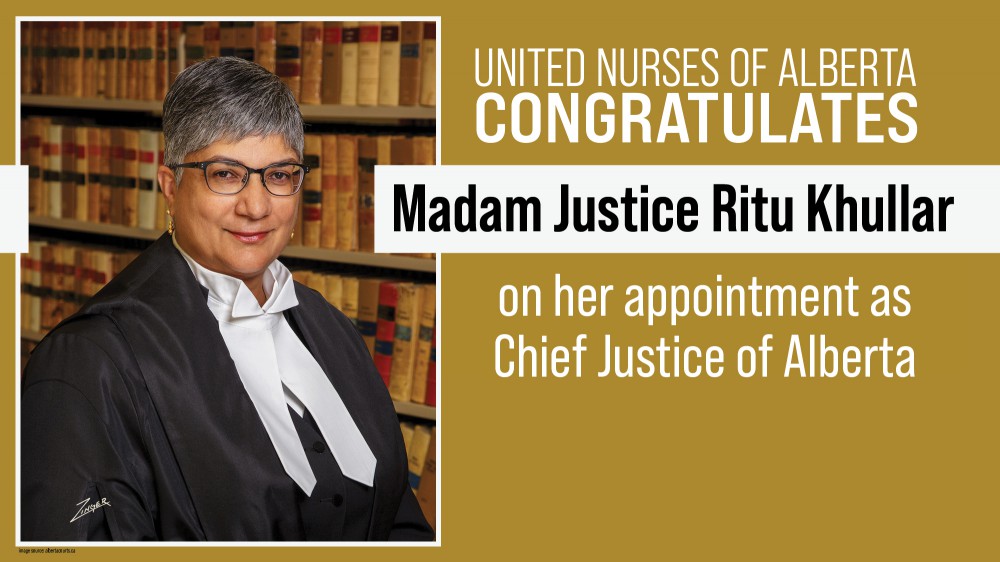 “
Before her appointment to the bench in 2017, Justice Khullar represented UNA in many cases, including at the Supreme Court of Canada.
”

United Nurses of Alberta is delighted to learn of the appointment of Justice Ritu Khullar of the Court of Appeal of Alberta as the Chief Justice of Alberta.

Justice Khullar was appointed to the Court of Queen’s Bench of Alberta in 2017 and elevated to the Courts of Appeal of Alberta, the Northwest Territories, and Nunavut in 2018, the prime minister’s statement said. It continued:

“From 1998 until her appointment to the judiciary, she practised with Chivers Greckol & Kanee (now Chivers Carpenter Lawyers), where she focused on labour and employment, privacy, administrative, human rights, and constitutional law, and served as managing partner for eight years. She appeared before numerous administrative tribunals and every level of court in Canada including the Supreme Court of Canada,” the statement from the Prime Minister’s Office said..

“Throughout her legal career, Chief Justice Khullar lectured at the University of Alberta and served on numerous committees of the Canadian Bar Association. She was also a member of the Federal Electoral Boundaries Commission for the province of Alberta in 2003, and more recently, she was the Chair of the Government of Alberta’s Advisory Panel on Coal Communities. She also acted pro bono in significant cases, including representing Women’s Legal Education and Action Fund (LEAF) before the Supreme Court of Canada."

“Chief Justice Khullar has been active on a number of court committees and has continued to show her commitment to ongoing education through her work with the National Judicial Institute, the Canadian Institute for the Administration of Justice, and the Legal Education Society of Alberta.”

Before her appointment to the bench in 2017, Justice Khullar represented UNA in many cases, including at the Supreme Court of Canada in December 2016 when the union received intervenor status in a case related to addictions in the workplace, an issue about which UNA has been advocating for many years.”

UNA argued in that case that an addiction should be seen as a disability, not a condition for which a nurse should be punished by and employer or professional association.