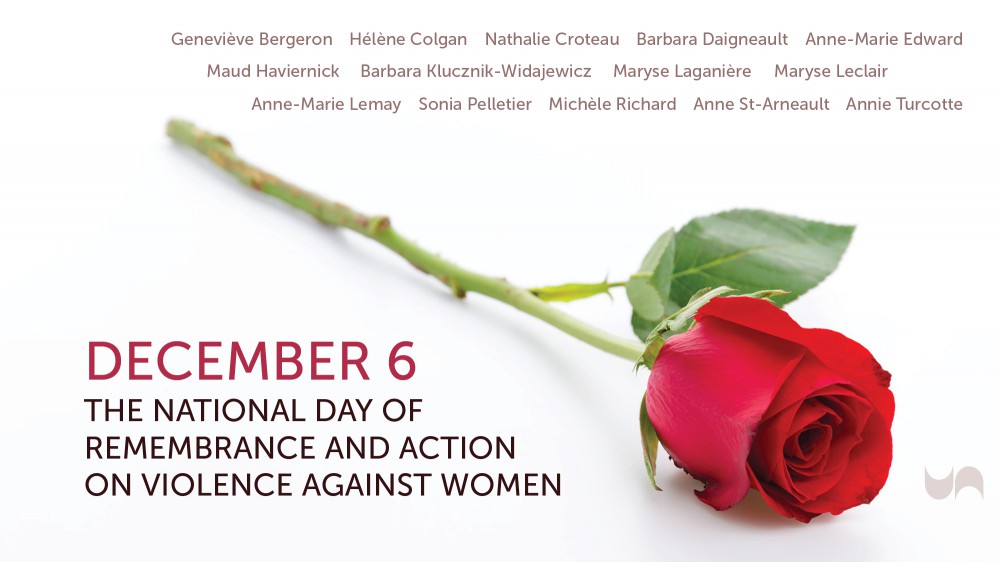 It has been 33 years since the vicious act of gender-based violence that took the lives of 14 young women at l’École Polytechnique de Montréal on December 6, 1989.

United Nurses of Alberta mourns the 14 engineering students who were murdered, and we recommit ourselves to reflecting on the impact of violence against women in our society.

UNA acknowledges that misogyny and the resulting violence against women and girls continues today in Canadian society, and we stand with the demands this week that the crisis of missing and murdered Indigenous women, girls, and two-spirited people to be treated as a national emergency.

“It is so troubling that the attitudes that led to the tragedy in Montreal in 1989 continue to result in similar tragedies like the horrible recent discoveries in Winnipeg,” said UNA President Heather Smith. “The time for decisive action to eliminate violence against women and children, gun violence, and the continuing tragedy of missing and murdered Indigenous women is long past.”

The anniversary of December 6, 1989, known as the National Day of Remembrance and Action on Violence Against Women, also represents an opportunity for all Canadians to think about how reporting of violence against women grew during the pandemic, Smith said.

Communities and individuals must speak out. All levels of government must continue to be reminded of their responsibility to take meaningful steps to prevent all forms of violence against women and girls in Canada, including measures to restrict the possession and misuse of firearms.

Working on the front lines of health care, Alberta’s nurses see the impact of violence against women, and sometimes experience it themselves in their own workplaces and homes.

“This solemn occasion reminds us to renew our commitment as union members and citizens to seek practical ways to end violence against women and girls in Canadian homes, communities, schools and workplaces,” Smith said.

We remember each of the 14 young women who lost their lives on this day in 1989: