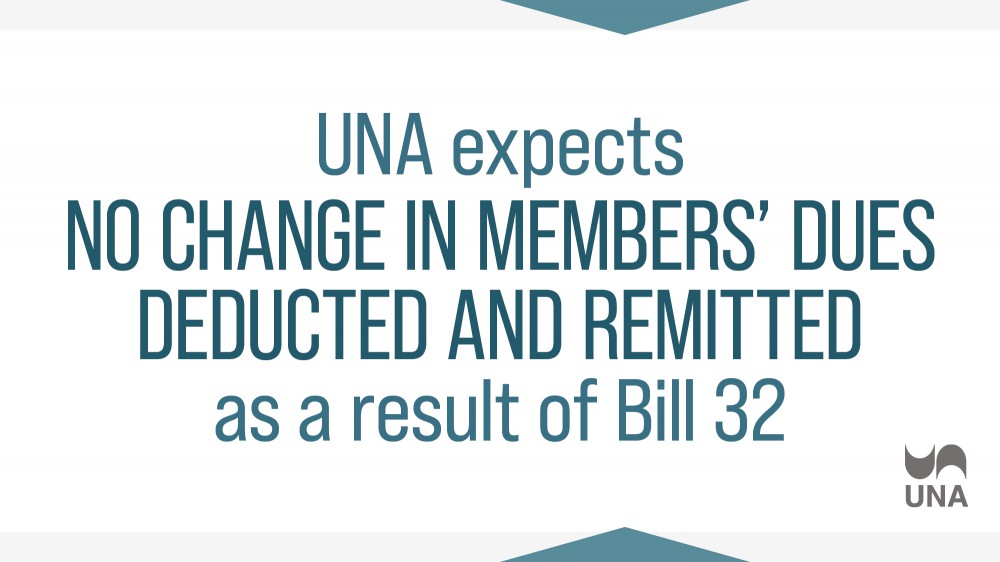 “
After carefully assessing all financial information and legal obligations, UNA has determined that all of its members’ union dues are spent on core activities.
”

In accordance with the requirements of the Restoring Balance in Alberta’s Workplaces Act, United Nurses of Alberta has undertaken a thorough review of all expenditures and has consulted legal counsel about the various entities to which the union provides money as well as all sources of income, including sources other than union dues.

The Act, often referred to as Bill 32, requires Alberta unions to report periodically to their dues payers on the percentage of dues spent on core and “non-core” activities.

Under the legislation, after August 1, 2022, employers may only deduct and remit to the union that portion of dues to be spent on core activities unless the dues payer has provided an authorization for the employer to deduct dues for non-core activities as defined by the Act.

After carefully assessing all financial information and legal obligations, UNA has determined that all of its members’ union dues are spent on core activities.

As a result, no action is required. As of August 1, 2022, UNA expects its members’ employers to continue to deduct and remit dues in the same amount as have been deducted and remitted to this point.

UNA has always been transparent with members about budgets and spending. Copies of the complete annual budget continue to be available to any member who requests one.

Elected delegates vote on an annual provincial budget each year at UNA’s Annual General Meeting and local members have the opportunity to vote to ratify Local budgets at their Local’s AGM. UNA’s annual audited statements are approved by the Executive Board and presented for information at each UNA annual general meeting. UNA’s audited financial statements are a consolidated review of our financial records inclusive of the locals as well as the provincial organization.