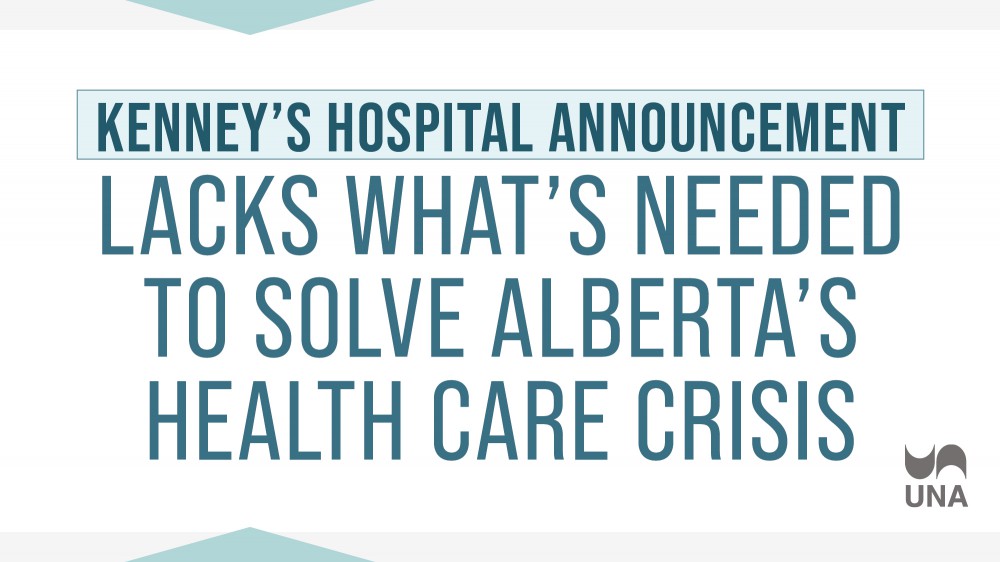 “
It was appropriate to hold it in a room full of empty beds, because AHS is going to have trouble finding nurses to staff any of them.
”

Premier Jason Kenney’s update on new hospital beds this morning did not answer the fundamental question about how to end the continuing crisis in Alberta’s health care system.

“Premier Kenney gave no indication in his remarks that his government has any plan to recruit new nurses or other front-line workers for Alberta’s health care system, or even to retain the ones we have now,” said UNA President Heather Smith.

Right now, she noted, nurses are exhausted and disillusioned from sacrificing throughout the pandemic to keep the health care system running. Many are seriously contemplating retiring or leaving the profession for other work, or departing for other jurisdictions where pay and working conditions are better.

Smith said solving the crisis in health care has to start with acknowledgement by the government that there is a crisis.

After that, Alberta’s government needs to commit to making nurses’ and other health care workers’ jobs more secure, which would allow Alberta Health Services to reduce its heavy reliance on expensive temporary contract “agency” nurses for up to $100 an hour.

It also needs to commit immediately to creating more educational opportunities and supports for Albertans considering a career in nursing, and to a serious recruitment and retention program to bring nurses to Alberta.

“That will require treating nurses and their unions as essential contributors to the solutions Alberta needs, and no longer acting as if they are enemies,” she said.

Smith noted that Premier Kenney’s news conference offered no new information or solutions, it only re-announced plans to add the 50 surgical beds province-wide first announced in February’s budget, including an update that 19 of those beds have now opened.

“It was appropriate to hold it in a room full of empty beds,” she commented, “because AHS is going to have trouble finding nurses to staff any of them.”

United Nurses of Alberta represents more than 30,000 Registered Nurses and Registered Psychiatric Nurses throughout Alberta. The majority of those nurses are employed by Alberta Health Services and Covenant Health.