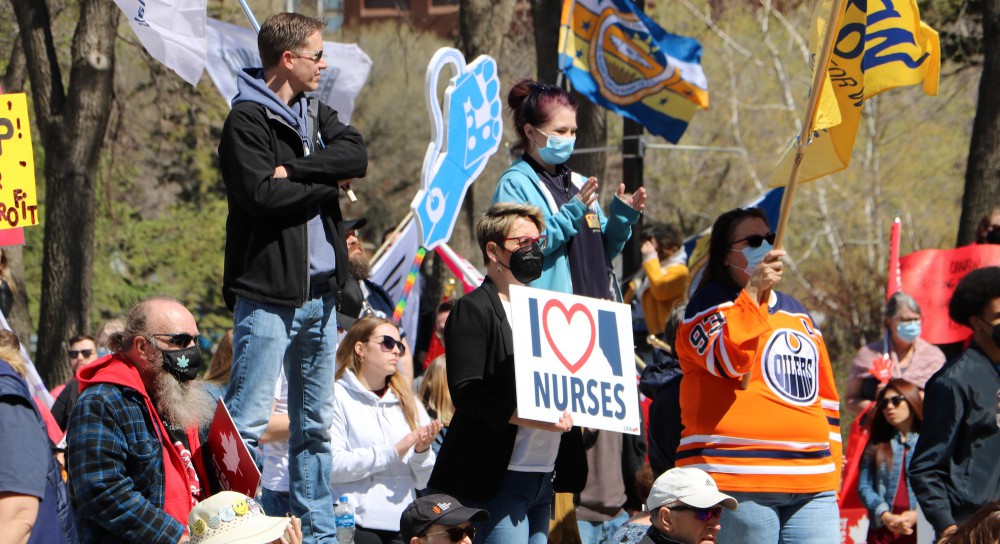 “Better Way Alberta” rallies were held across Alberta on May 14 to show support for nurses and health care workers and protest the Alberta government’s attacks on the province’s health care system.

“What we need is money and political will to invest in public health care,” United Nurses of Alberta President Heather Smith told the rally at the Alberta Legislature in Edmonton. “We need to move forward with things like pharmacare and real reforms to our long-term care system.”

Smith called for federal money to support provincial health care programs to be provided with “strings attached” to ensure the Alberta government doesn’t divert it to subsidize private, for-profit corporations.

Reid said she fears the government’s plan to use public money to finance surgeries at private for-profit clinics will lead to longer waits for surgeries, not the opposite as the government claims. “You steal people from the public hospital system and put them in the private system and there’s no surplus. So if you’re an anesthetist working in the private OR, then the one public OR is closed.”

“Our public health care isn’t broken, it’s being intentionally dismantled by an ideological government intent on privatizing every sliver they can,” said Friends of Medicare executive director Chris Gallaway, who spoke at the rally in Lethbridge.

“Health care decisions should be made prioritizing people, not profits,” Gallaway said. “It should be about providing the care Albertans need, not using our public health care dollars to facilitate privatization and profit for corporations.”

“The provincial government went to war with doctors, driving them from our province and our city,” said Bev Muendel-Atherstone, Friends of Medicare’s chapter chair in Lethbridge. “Now over 40,000 people in Lethbridge are without access to a family doctor.”

Canada celebrates National Nursing Week each year during the week that includes 12 May, the birthday of Florence Nightingale.