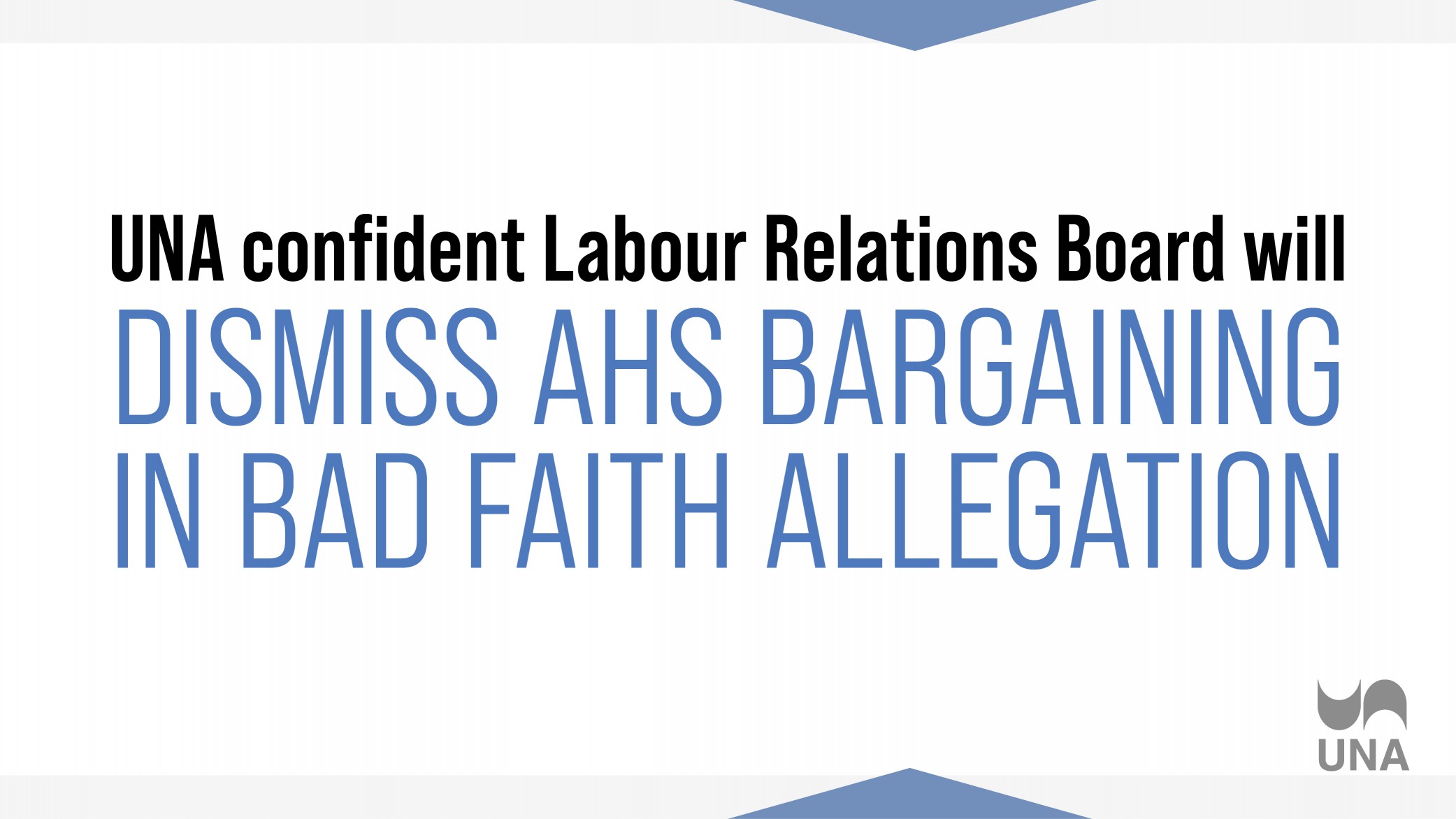 “
There is in fact no dispute that AHS has been recruiting Registered Nurses through third-party recruiters and advertisements posted by those recruiters have been seen by hundreds of people in Alberta and other provinces.
”

Alberta Health Services has filed an unfair labour practice complaint with the Alberta Labour Relations Board alleging United Nurses of Alberta is bargaining in bad faith.

UNA is confident AHS’s claim that the union “is publicly making false representations about material facts,” specifically that AHS is recruiting Registered Nurses through third-party recruiters across the province, is without merit and will be dismissed by the Board.

There is in fact no dispute that AHS has been recruiting Registered Nurses through third-party recruiters and advertisements posted by those recruiters have been seen by hundreds of people in Alberta and other provinces.

UNA is confident that commenting factually on an admitted public practice of AHS cannot be described, as the AHS complaint to the Board argues, as “reckless” or “the antithesis of good faith bargaining.”

When UNA and AHS bargaining committees met on August 6, among the items discussed were recruitment strategies to address the shortage of nurses in the province.

During that meeting, UNA representatives asked the employer what strategies they would be employing but were provided with no details.

Later that week, however, UNA members began to report having seen advertisements from third-party recruiters seeking Registered Nurses to work in Alberta at rates significantly higher than those paid under the UNA collective agreement with AHS.

UNA chose not to go public with that information at that time but emailed AHS on August 11 asking AHS to come to the next meeting prepared to discuss this. At the next meeting, on August 13, AHS negotiators confirmed on August 11 that they were in fact recruiting Registered Nurses through third-party recruiters. In addition, AHS representatives confirmed that they were still seeking monetary rollbacks from UNA members.

At that point, UNA made the decision to inform members accordingly, and that was done in the bargaining update posted on UNA’s website and distributed to members on August 13. UNA stands by the accuracy of the statements made in its August 13 bargaining update for members.

In a related matter, public statements have been made by both AHS and Finance Minister Travis Toews that the employer will apply for informal mediation under Section 64 of the Alberta Labour Code. As of this afternoon, however, UNA has not received notification that AHS has requested informal mediation.

Copies of the AHS complaint to the Labour Relations Board and a letter from AHS Lead Negotiator Raelene Fitz to UNA Labour Relations Director David Harrigan have been attached to this update. They can be read by clicking on the links at right.

We will post our response to the complaint once it has been submitted to the Labour Relations Board.