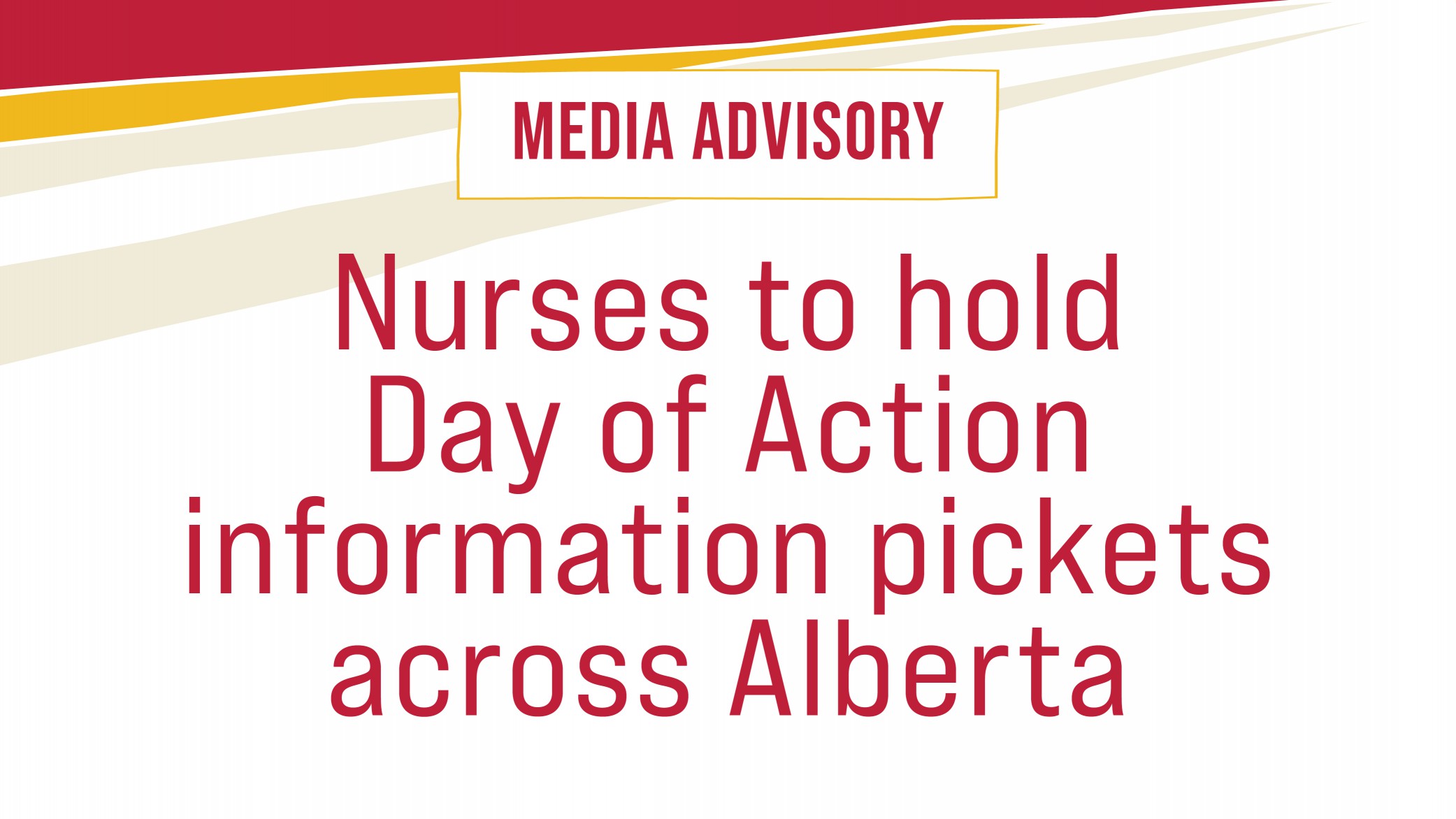 Members of United Nurses of Alberta will send a message to the Alberta government on Wednesday, August 11, of their commitment to Albertans and our province’s public health care system.

The message will take the form of information pickets and other activities at health care facilities where Registered Nurses and Registered Psychiatric Nurses represented by UNA work as well as other locations throughout the province. Members of other health care unions will join the information walks at many locations.

Larivee will also be available for media interviews at RAH, after 1:15 p.m. at the University of Alberta Hospital, and later in the afternoon at Alberta Hospital Edmonton.

UNA Second Vice-President Cameron Westhead will be available for media interviews at the information pickets at Red Deer Regional Hospital Centre from 11:30 a.m. to 1 p.m. and the Peter Lougheed Centre in Calgary from 2:30 to 4 p.m.

Information on times and locations, updated daily, is found at: https://www.una.ca/1267/una-day-of-action-on-august-11

After 18 months on the front lines of the COVID-19 pandemic, Alberta’s nurses are exhausted and overworked. Nurses go to work every day to make sure Albertans get the best and safest patient care possible. They need fairness in the workplace.

Beds are closing because hospitals are short of nurses. This is a result of the pressure on the system caused by pandemic and a long history of understaffing nursing positions.

The rollbacks proposed by the government are an insult to nurses and won’t help Alberta recruit and keep health care workers, which is what is needed most to keep hospital beds open.

Nurses must also able to focus on safe patient care, which is hard to do when hospitals are understaffed and government is attacking nurses and other health care workers.

When: August 11 starting at 1200
Where: Starting outside of the Brooks Composite High School (650 - 4th Avenue E, Brooks) at 1200, the info-picket will walk past the Brooks Health Centre to MLA Michaela Glasgo’s constituency office on 2nd Ave and back to BCHS.
Contact: local191exec@una.ca

When: August 11 from 1030 to 1200
Where: Outside the Drayton Valley Hospital and Care Centre (4550 Madsen Ave, Drayton Valley)
Contact: local28exec@una.ca

When: August 11 from 1000 to 1400, speakers at 1200
Where: Outside the Royal Alexandra Hospital (10240 Kingsway NW, Edmonton) along Kingsway Avenue.
Contact: Lonee Rousseau at lrousseau@una.ca

When: August 11 from 1130 to 1300
Where: Outside of the Northern Lights Regional Health Center on 7 Hospital Street in Fort McMurray, from there they will be marching down Franklin Ave to MLA Tany Yao's constituency office.
Contact: local96exec@una.ca

When: August 11 from 800 to 1330
Where: Outside the WestView Health Centre (4405 S Park Dr, Stony Plain)
Contact: Heidi Kushnerek at hkushnerek@una.ca

When: August 11 from 900 to 1700
Where: Outside the Strathmore District Health Services (200 Brent Boulevard, Strathmore)
Contact: local313exec@una.ca

When: August 10 starting at 1000 [*Note this info-picket is happening on August 10]
Where: Outside the east side of the Westlock Health Care Centre (10220 93 St, Westlock)
Contact: local73exec@una.ca