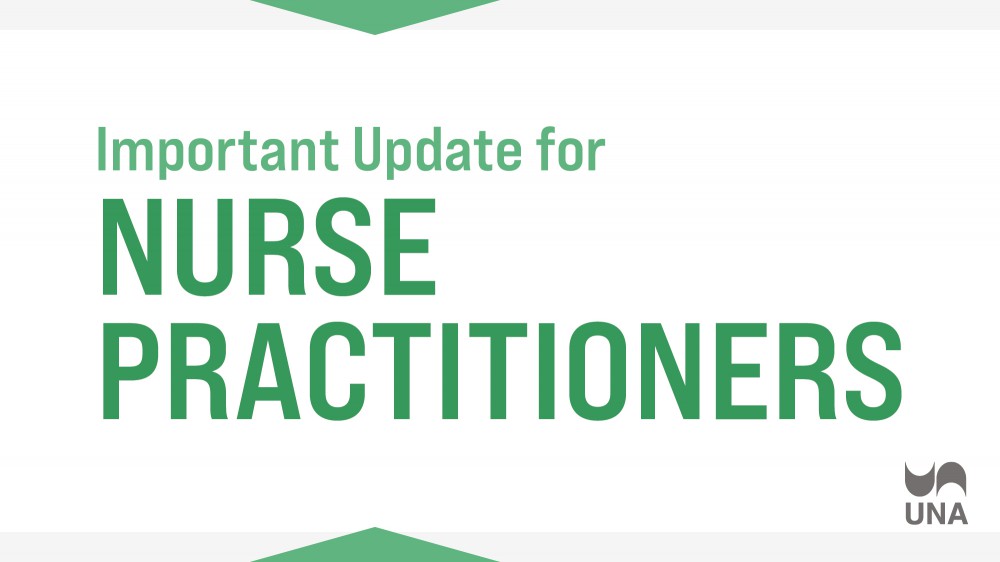 In lieu of a joint meeting, we are eager to provides some additional clarity and information for NPs.

Due to the nature of how Nurse Practitioners are employed in Alberta, a union can only apply to the Labour Relations Board for a certificate to bargain on behalf of a group of employees for one employer at a time (ie: Alberta Health Service, Covenant Health, PCNs, etc).

Because most Nurse Practitioners in Alberta are employed by AHS and Covenant Health, UNA is first focusing its resources on helping those NPs to organize to join our union.

Primary Care Networks: PCNs do not fall within the functional bargaining unit created by the government, which only applies to Regional Health Authorities (ie: AHS). The Labour Relations Board typically expands this policy to nursing homes but not PCNs or clinics.

For NPs at a PCN to be unionized, the Labour Relations Board would likely require an “all employee unit” for each PCN. This means that NPs employed by PCNs would have to join a union that is also willing to represent other employees at that workplace, which could include Registered Nurses, Registered Psychiatric Nurses, Licensed Practical Nurses, and other allied health workers.

Unlike the Nurse Practitioner Association of Alberta Union, which has a constitution that states only NPs are allowed to join that union, UNA allows other health care workers who would be part of those “all employee units” to join our union, vote at Annual General Meetings, and be elected to union positions.

UNA has experience representing all employee bargaining units and will work with interested staff at each PCN to join our union.

Self-Employed NPs: As unions represent employees, it is not possible to represent self-employed NPs. Most unions specifically state that only people “eligible for collective bargaining” are eligible for membership.

Faculty members: Some NPs are faculty members at universities where their bargaining agent continues to be the applicable Faculty Association. The creation of an NP functional bargaining unit does not change this.

Negotiations and contract administration and enforcement are complex and expensive undertakings.

United Nurses of Alberta has a proven track record of strongly representing its members and negotiating the best health care Collective Agreement provisions in the country.

UNA has the infrastructure in place as well as the financial resources to support NPs through the process of certification and negotiating a collective agreement, with a team of more than 40 labour relations professionals, and the finance and IT teams necessary to do so.

UNA also has a strong team of communications, occupational health & safety and professional responsibility professionals that help UNA take a strong message to the employer, the public and the government.

This type of expertise and infrastructure cannot be created overnight.

Nurse Practitioners will have a strong voice in UNA

By joining UNA, Nurse Practitioners would be part of a union that is 30,000 strong and is recognized as a proud and authoritative voice for nurses issues in Alberta.

As nurses who work in long-term care can attest, their being not a majority in the union membership has not stopped UNA from championing and advocating for long-term care. Being a small number doesn’t mean your issues are not supported by a much larger voice.

Through their UNA Locals, NPs will be able to participate in quarterly district meetings and elect delegates to UNA’s annual general meeting where they will have a vote in the most important matters facing the union.

NPs will also have the expanded ability to participate in UNA’s affiliate organizations, including the Canadian Federation of Nurses Unions, the Alberta Federation of Labour, and the Canadian Labour Congress, which advocate on labour issues at a national and provincial level. CFNU has been a strong voice for nurses in Ottawa, where it has advocated for the expansion of NPs in the health care workforce.

UNA has a strong democratic tradition

UNA is deeply committed to member democracy. Decisions on policy, constitutional changes, and elections of executive officers and district representatives are made by a vote of democratically elected delegates at a UNA Annual General Meeting.

Before the expiry date of any UNA collective agreement, affected members can attend Demand Setting Meetings at which the locals discuss and vote on their bargaining proposals.

This is the process through which UNA’s members democratically decide priorities in bargaining. UNA’s negotiating committees, the people who actually meet with the employer’s representatives at the bargaining table, are made up of working members of the union, elected by their co-workers to represent them.

No UNA agreement takes effect before the members whose working lives it governs have the opportunity to discuss and ratify it in a democratic vote. Province-wide agreements, like the contract with Alberta Health Services, must be subject to a vote of all affected members, and must be passed by a majority of both members and locals.

It is not UNA’s intent to replace the Nurse Practitioner Association of Alberta. In other provinces where NPs are members of the provincial nurses’ union, they also have their own Association.