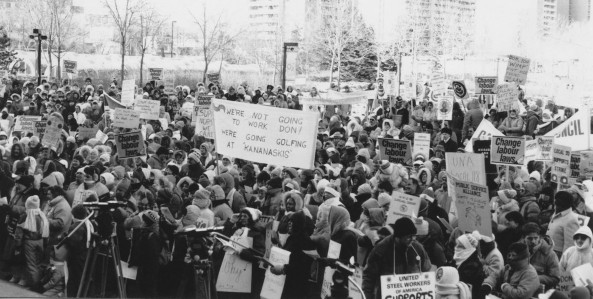 “
They “tried to intimidate us and it is not working. They can call in the army, but only a negotiated settlement will stop the strike!” - UNA President Margaret Ethier in 1988.
”

The United Nurses of Alberta members had dressed like Arctic explorers in parkas and scarves for the province-wide strike.

They were braced to spend a cold and desolate winter on the Prairies outdoors, or in jail, if necessary. Temperatures would hit 40 below before the labour dispute would end.

But faced by employers demanding major concessions, they believed they had no choice.

For the next 19 days, they fought an unreasonable employer and government determined to take big rollbacks and a brutal deep freeze for their right to a fair collective agreement.

The UNA members walked out 33 years ago today in defiance of a 1983 Alberta law that put nurses in the same category of essential service workers as firefighters and police officers. They also defied a ruling by the Alberta Labour Relations Board, which had ruled it was even illegal for them to hold a strike vote.

The hospital employers’ negotiating association filed for contempt of court charges against UNA’s leaders. Premier Don Getty cut short his winter vacation and flew home from Palm Springs. The employers’ association and the government threatened to jail nurses for striking.

They “tried to intimidate us and it is not working,” said UNA President Margaret Ethier at the time. “They can call in the army, but only a negotiated settlement will stop the strike!”

On February 9, UNA paid a $250,000 fine for criminal contempt of court. When the dust had settled, UNA would have paid $425,000. At the time, it was the largest fine against a union in Canadian history.

But UNA’s members held firm. When a collective agreement was ratified on February 13, 1988, the employers had dropped their demands for concessions and rollbacks.

As President Heather Smith remembered in 2004: “the ’88 strike was about not going backwards, and we did not go backwards. What the ’88 strike did was launch us into the Nineties.”

It set the stage for the next round of bargaining in 1990, which saw big gains in nurses’ pay.