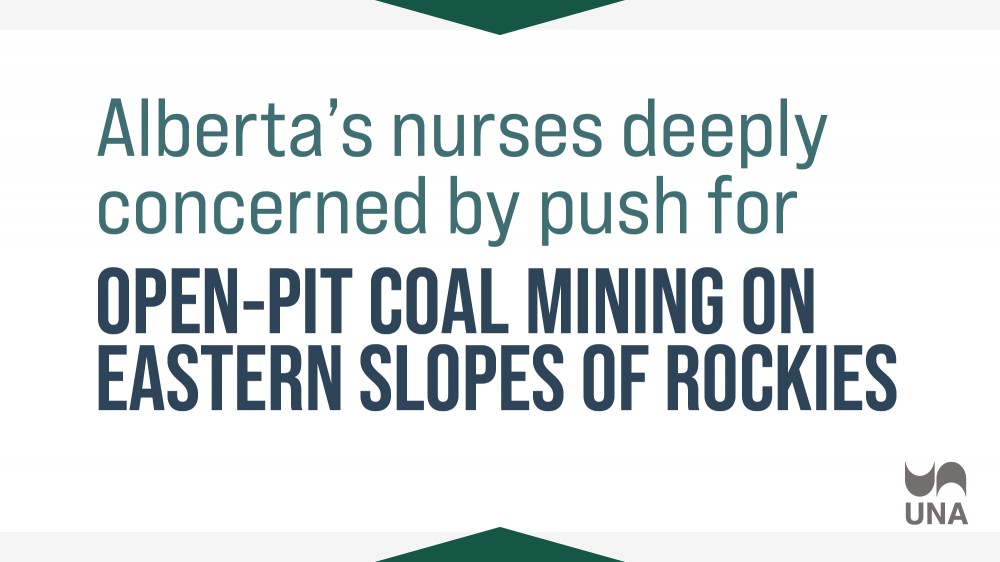 STATEMENT FROM THE UNITED NURSES OF ALBERTA ON OPEN-PIT COAL MINING IN SOUTHWESTERN ALBERTA:

Nurses are deeply concerned with the health of their fellow citizens, including their long-term health and economic wellbeing.

So it is appropriate that United Nurses of Alberta, the union that represents more than 30,000 Registered Nurses, Registered Psychiatric Nurses and allied health workers throughout Alberta, shares the concerns of many of its members in Southern Alberta about the provincial government’s suspension of environmental safeguards for the Eastern Slopes of the Rocky Mountains and its efforts to encourage open-pit coal mining in the region.

We are saddened by the United Conservative Party Government’s decision last May to rescind a 44-year policy that protected the Eastern Slopes, their natural state and beauty, and the water millions of Canadians depend on for drinking, agriculture and recreation. It is particularly troubling that this government killed the policy during a pandemic at the beginning of a long weekend without public consultation with people who would be directly impacted.

Had the Alberta Coal Policy remained in place, most of the destructive and dangerous mining projects now being contemplated in the region would have been blocked.

The impact of mining coal, whether for the production of steel or the generation of electricity, on the environment of the region, the species that live within it, or the health of our warming planet is likely to be severe. The headwaters of many rivers in Southern Alberta are in this region and the destruction of habitat, including that of the cutthroat trout and the bull trout, Alberta’s provincial fish, will be directly impacted. The waters of these rivers flow through other provinces to the Hudson Bay.

While we recognize that such projects have short-term economic value and create some jobs, we believe the benefits are likely to be negligible compared to the damage done to other industries such as agriculture and tourism, and to the long- term health of Albertans and the earth’s atmosphere. We know that profits made by foreign-owned mining companies are unlikely to remain in Alberta or be recouped in taxes by a government motivated by tax cuts as a cure-all for all economic woes.

We urge the government of Alberta to restore the Coal Policy wisely put in place by the government of Peter Lougheed in 1976, to continue our province’s traditional emphasis on watershed protection, recreation, tourism and a healthy population, and to listen to the wise counsel of Albertans who live in the region.