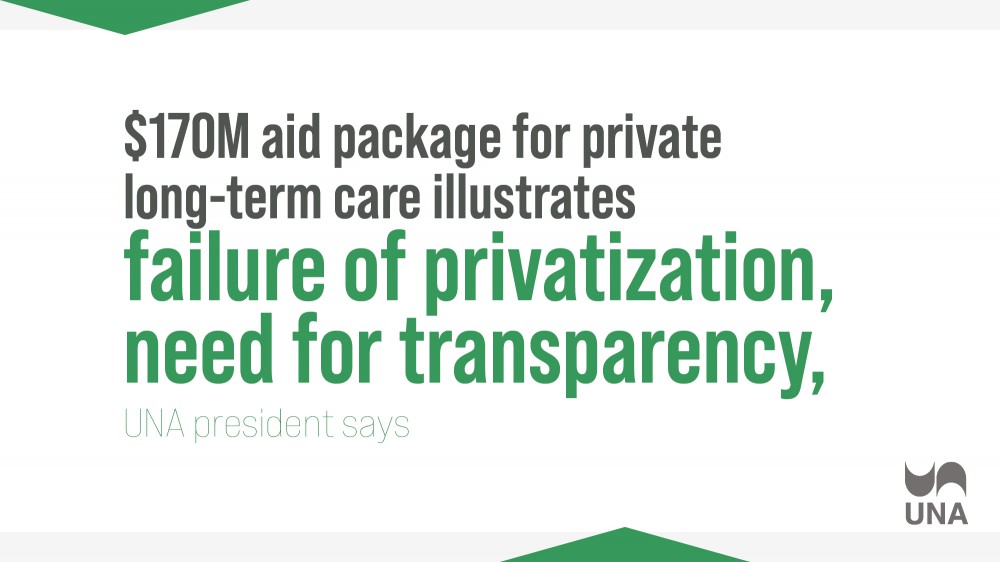 “
“In essence the government is rewarding private operators who have diverted public funding to profits instead of paying fair wages and ensuring adequate staffing.” — UNA President Heather Smith.
”

The $170-million aid package for private long-term care providers announced by the Alberta government Tuesday illustrates the failure of privatization as a model for delivering care for elderly and vulnerable Albertans.

This emergency payment would not have been needed in a properly funded, publicly operated long-term-care system, said United Nurses of Alberta President Heather Smith.

While the money is necessary as an emergency measure to protect vulnerable residents of private long-term care facilities that have been hit hard by COVID-19, she said, it amounts in many cases to a bailout for businesses with a conspicuously bad record of protecting the people trusted to their care.

“In essence the government is rewarding private operators who have diverted public funding to profits instead of paying fair wages and ensuring adequate staffing,” she said.

The UNA president noted that about 80 per cent of the deaths from COVID-19 in Canada have taken place in residential facilities, and outside of Quebec approximately three quarters of those are thought to have been in privately run long-term care.

“In most cases, these were needless, preventable deaths,” Smith said. “The current system is broken and the Alberta government’s priority should be to fix it by returning it to the public sector, not by shoring up for-profit private operators with public funds for ideological reasons.”

The government’s news release said extra funding will amount to $14.2 million per month, retroactive to March 15. The spending is being promoted by the government as part of the province’s post-COVID-19 economic re-launch program.

The funding is for all contracted continuing-care providers and lodges, including independent, non-profit and voluntary providers, said Steve Buick, press secretary to Health Minister Tyler Shandro. He said the announcement does not apply to AHS subsidiaries or Covenant Health.

Smith noted the need for these emergency funds illustrates just how flawed and wrong the Ernst & Young review of Alberta Health Services was in recommending the privatization of Carewest and Capital Care.

She called on the provincial government to ensure there is complete public transparency of how private for-profit and not-for-profit long-term-care operators use the emergency funds.

Smith said UNA supports calls for systemic change at the federal level to bring long-term care into the Canadian health care system and regulate it with national legislation that would require proper staffing and safety protections for residents and workers, and wages that reflect the importance of the work they do for vulnerable Albertans.