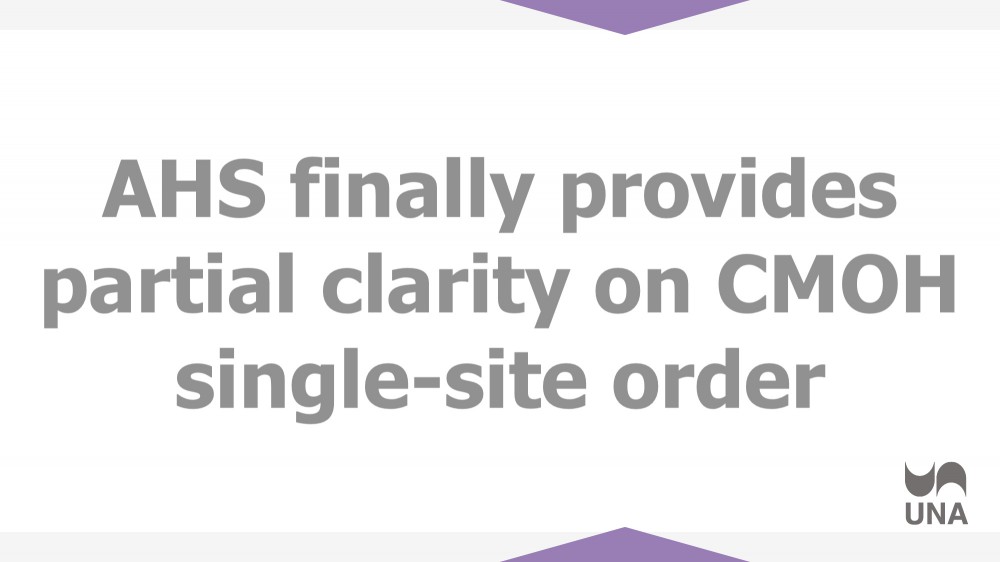 More than a month after Alberta’s Chief Medical Officer of Health issued an order restricting employee mobility among worksites during the COVID-19 emergency, Alberta Health Services has finally begun to apply the order.

Lists of affected sites and affected employees were provided to United Nurses of Alberta late last week and AHS implemented the order at some sites this week.

The order will begin to be put into effect in the Edmonton Zone on Thursday, May 14. Still other locations are expected to be included later.

For reasons that remain unclear, and despite a Ministerial Order that states “staffing decisions will be supported by ongoing dialogue and problem solving among health care providers, bargaining agents (at unionized health care facilities) and staff members,” AHS and other employers are thus far excluding unions. As a result we do not know how many “waves” of implementation are planned or the dates of implementation.

When the order was issued on April 10 by Dr. Deena Henshaw, it was widely expected it would be implemented immediately throughout the province.

The intention of the policy was to ensure employees working at legally defined auxiliary hospitals and long-term care facilities could only work at a single site to reduce the possibility of employees who normally work at more than one site unwittingly spreading the coronavirus while moving between locations.

However, the original order did not take into account the fact that most hospitals in Alberta are designated as both acute care hospitals and auxiliary hospitals or nursing homes. It was unclear if the order applied only to the long-term care section or to the entire building. In addition it is not always easy to determine what is meant by “long-term care” in such facilities as many units have a combination of patient types.

UNA was extremely concerned that there would be confusion and staff shortages without clear articulation of how the order applied to employees. We wanted the order to apply as soon as possible, so we pushed hard to get clarity.

AHS proved unable or unwilling, however, to provide UNA or anyone else with answers to key questions on how and at what sites Dr. Hinshaw’s order would be implemented.

On April 22, UNA felt it was forced to file a province-wide grievance seeking immediate clarity from Alberta Health Services on the how it intended to apply the order.

As a result, AHS and the Department of Health delayed implementation of the order, but did not provide UNA with any additional information.

The grievance sought clarity so that UNA members could go to work knowing they were in compliance with the Chief Medical Officer of Health’s order.

Some clarity has now been provided with the publication of the lists of affected members and worksites, even without information on when the order is finally being implemented at some sites.