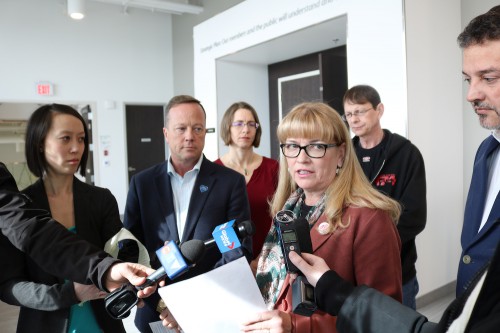 UNA President Heather Smith addresses the media at the AFL’s March 4 news conference while reporters and other labour leaders listen.
“
Some of Alberta’s largest unions have launched the next phase of a campaign to oppose the Kenney government’s agenda of cuts, privatization, deregulation and attacks on workers’ wages and workers’ rights.
”

Some of Alberta’s largest unions have launched the next phase of a campaign to oppose the Kenney government’s agenda of cuts, privatization, deregulation and attacks on workers’ wages and workers’ rights.

“The new campaign is built around the phrase that we’re hearing over and over from the thousands of Albertans we represent,” said Alberta federation of Labour President Gil McGowan at a news conference in Edmonton on March 4.

The AFL campaign includes a website, an email tool and a number of video ads.

“During the 2019 election campaign, Jason Kenney’s list of promises was everywhere: ‘Jobs, economy, pipelines,’” McGowan said.  “That’s not what the UCP government has been delivering. … We want to encourage Albertans to tell UCP MLAs that this is not what people voted for and remind them that they don’t really have a mandate for most of this very damaging agenda.”

Unions are among the few effective counterbalances to the power of corporations and the wealthy and the political parties that represent their issues, McGowan said. “We take our obligation to stand up for ordinary working people very seriously.”

There are 29 unions representing 180,000 working Albertans affiliated with the AFL, including United Nurses of Alberta, the Health Sciences Association of Alberta, the Canadian Union of Public Employees, the United Food and Commercial Workers and the United Steelworkers. UNA President heather Smith and HSAA President Mike Parker took part in the March 4 news conference.