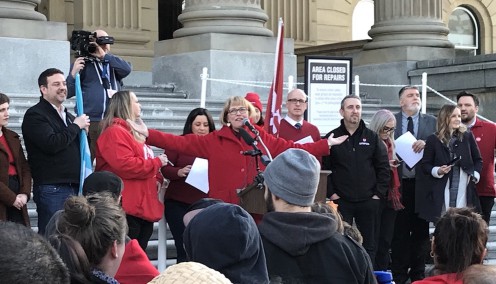 UNA President Heather Smith speaks to a crowd of 6000 outside the Alberta Legislature rallying against cuts in the provincial budget.

United Nurses of Alberta is deeply concerned about the direction the Alberta government is heading in its budget, released yesterday in Edmonton.

With population growth projected to be 1.6 per cent, in addition to increases in the cost of living, not adjusting the level of funding to the public health care system is the same as a cut over the next three years.

The government is on track to cut real per capita spending for health care by 12.3 per cent over the next three years.

Nurses are also concerned about the government’s plans to eliminate jobs and increase privatization of surgeries.

“The budget speech made it clear that they still intend to go full speed ahead with the very destructive and illogical recommendations from Ernst & Young and the MacKinnon panel,” Smith said.

“They asked us in the budget speech to work with them as partners. In what way have they made any attempt to work together? We have been under attack since the moment they were elected.”

UNA has attempted numerous times to arrange meetings with Premier Jason Kenny and Health Minister Tyler Shandro, but have been declined or not received a response from their offices.

“Nurses are the backbone of the health care system,” said Smith. “We are still recovering from the deep budget cuts of the mid-1990s. It’s outrageous and disappointing that this government appears to want to repeat that mistake.”