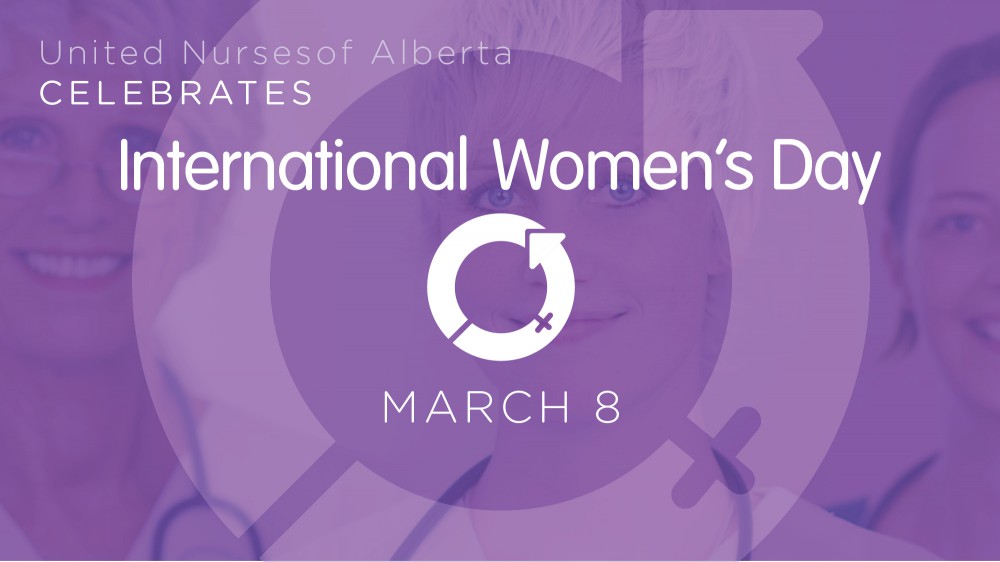 March 8 marks International Women’s Day, which has been celebrated for more than 100 years in countries across the globe.

As members of a profession in which women predominate, nurses are particularly conscious of the need to continue the effort everywhere in the world to secure justice and equality for girls and women that International Women’s Day symbolizes.

United Nurses of Alberta has long emphasized equality for all working people, regardless of their gender, in the way it represents its members and in the broader positions it takes issues in Canadian and Alberta society.

The theme for this year’s International Women’s Day is, I am Generation Equality: Realizing Women’s Rights. The theme is aligned with UN Women’s new multigenerational campaign, Generation Equality, which marks the 25th anniversary of the Beijing Declaration and Platform for Action. Adopted in 1995 at the Fourth World Conference on Women in Beijing, China, the Beijing Platform for Action is recognized as the most progressive roadmap for the empowerment of women and girls, everywhere.

The origins of International Women’s Day have been traced to labour disputes in New York City in 1857 and 1908, in which workers protested the dangerous, overcrowded and exploitive working conditions of women in the garment industry. The first International Women’s Day was celebrated in 1911 and, in 1977, the United Nations urged all countries to set aside a day to celebrate women’s rights.

The symbols of International Women’s Day are bread and roses – the bread representing women’s struggle for economic equality and the roses their women’s continuing efforts for a better quality of life.

UNA members are encouraged to recognize International Women’s Day by attending an event in their community. An event will be held on March 8  on the steps of the Legislature Building in Edmonton starting at 1:30pm and continuing with a march across the High Level Bridge at 2:15pm for a forum discussion at Metro Cinema.