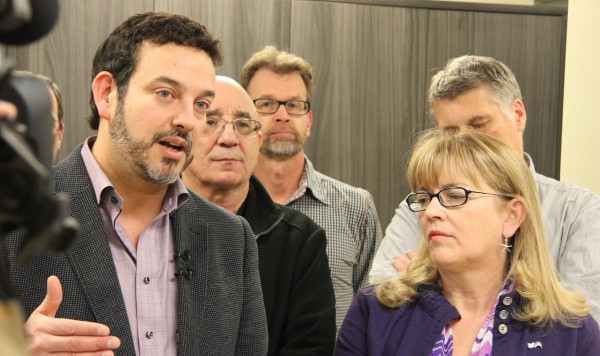 For the past six months, the Redford government has defended its plan to cut benefits for public-sector workers by pointing to the $7.4 billion unfunded liability attached to Alberta’s four provincial pension plans.

Finance Minister Doug Horner has repeated the figure at every opportunity. He has said that if nothing is done, the liability will only grow – and that, even if his cuts are implemented – it will take 30 years for the unfunded liability to disappear.

But what if Horner got his numbers wrong? What if the unfunded liability is not as big as the minister says it is and that it’s shrinking, rather than growing?

As it turns out, that’s exactly what’s happening.

Today, the unions involved in the Labour Coalition on Pensions, representing most of the 300,000 people covered by Alberta’s public sector plan, released a new report showing what the unfunded liability looks like today, as opposed to the two-year-old figures used by the Finance Minister.

The report, prepared by the independent actuarial firm George & Bell, shows that after factoring in the last two years of investment returns, the unfunded liability has dropped by about a billion dollars.

This supports the actuary’s earlier conclusion that the plans are on their way to eliminating their unfunded liabilities in seven years – even without any cuts to the benefit that workers paid for themselves.

Here’s what some of the presidents involved in the Labour Coalition on Pensions had to say about the new report from George & Bell:

“What the report shows is that the Redford government’s plan for pension cuts is built on a foundation of misinformation. They’re using phony numbers to justify a plan that is really unjustifiable.” Gil McGowan, Alberta Federation of Labour (AFL)

“It’s important for people to understand that the $7.4 billion unfunded liability was a reflection of the health our pension plans in the immediate aftermath of the global recession. The new actuarial report shows that the situation is rapidly improving with the strategies the LAPP board of trustees has put in place.” Elisabeth Ballermann, Health Sciences Association of Alberta (HSAA)

“The Minister and the Premier are using numbers they know are wrong to justify their plan to break promises made to nearly 300,000 Alberta workers and retirees. This isn’t just bad accounting, it’s deceitful politics.” Guy Smith, Alberta Union of Provincial Employees (AUPE)