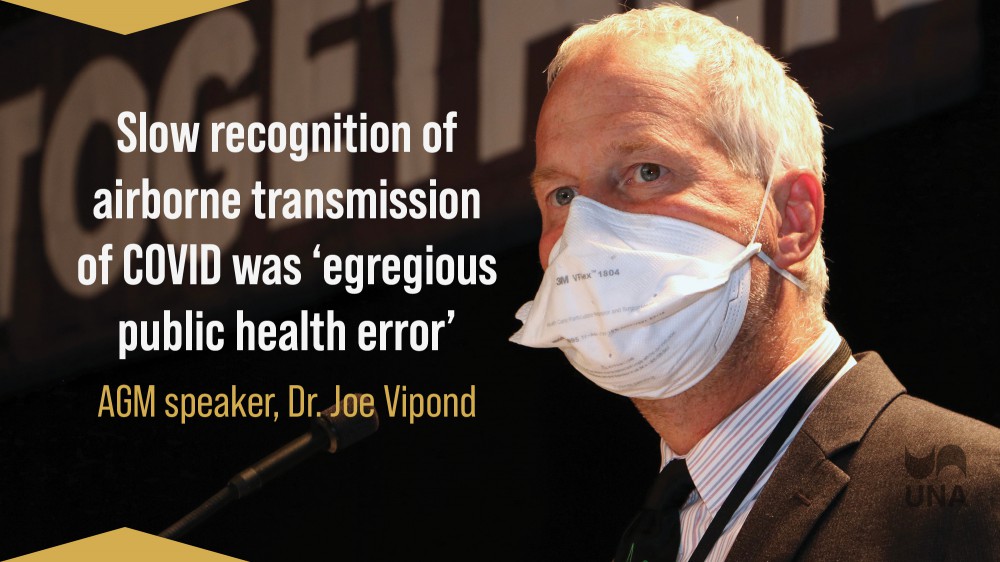 Resistance to recognizing that COVID-19 is spread by airborne transmission resulted in “the most egregious public health error in modern history,” Dr. Joe Vipond told delegates to United Nurses of Alberta’s annual general meeting on Oct. 18.

Vipond, a Calgary Emergency Room physician who became a passionate advocate for masking to slow the spread of COVID-19 early in the pandemic and a thorn in the side of Alberta’s government throughout, told more than 800 members, observers and staff at the AGM that “we need to talk about how such an amazingly dangerous error occurred with our most learned colleagues at a time of great challenge to humanity, an error that caused so much death and suffering.”

In his presentation – entitled “Blinders on: willful ignorance never ends well” – Vipond described how he was shocked early in the pandemic to learn how evidence he saw in the news wasn’t reflected in what he was hearing at workplace seminars about how COVID spread.

Workplace information suggested that asymptomatic COVID spread was uncommon, spread of the disease in hospital was rare, and transmission was primarily by droplets, he said. Based on that, health care workers were told, “universal masking wasn’t important in the emergency rooms, but only necessary for COVID-positive or suspected patients.”

“I got to thinking, ‘If asymptomatic is truly common, then not only do we need to be masking in the ERs, but in the general population.’”

That was when Vipond started to really annoy the provincial government, advocating mask mandates and calling it to account whenever it wavered from a commitment to public health.

In the summer of 2021, he organized a series of well-attended public rallies calling on the province to abandon plans to eliminate most testing for COVID-19, contact tracing, mask mandates in schools, and the requirement for infected persons to isolate.

So, what led to “the airborne debacle”?

The cognitive dissonance that goes with misinterpreting data made it hard for those responsible to acknowledge errors to protect others, Vipond said. “There must have been an element of ‘We’ll just get through this wave, and we’ll be okay.’ But then the waves just kept coming.”

“We kept running into situations where public health either seemed to have misinterpreted the data or had political manipulation preventing them from making safe decisions,” he said.

Starting in July 2020, the Public Health Agency of Canada began creating summaries of evidence that indicated substantial support for airborne transmission. “But these were never posted publicly. There were never any public news conferences or media campaigns to warn the public. There was never any discussion on how this impacted health care workers.”

As a result, “it took over a year to acknowledge the truth.”

At last, Vipond said, the tide began to turn by April 2021. “Both the WHO and CDC started to include wording relating to airborne transmission on their websites. But again, no public news conferences, no media campaigns to explain to the public how to best protect themselves from the ongoing threat.”

Indeed, he said, “the media has been much better than the public health agencies on bringing this fact to the attention of the public.”

Modelling showed the pandemic would not end with a non-sterilizing vaccine. “We needed protections, like ventilation and mask mandates, to decrease transmission to the point where waves wouldn’t keep inundating us, especially with the rapid evolution of new immune evading variants,” Vipond said. “But our leaders had no stomach for protections.”

The result has been “a profoundly ableist society” in which the majority “can go out and be safe in the knowledge that if you get infected you are unlikely to die” and the rest are “left to our own to hide or risk all.”

Moreover, Vipond said, “We continue to see wilful ignorance from our leaders pretty much everywhere when we look at the current state of pandemic affairs.”

“I don’t have great faith that the current premier of this great province has foresight, or will provide good leadership,” he added. “I think her wilful blinders are bigger than most people’s. So, the next few months, or years, are going to difficult for those who care about each other.”

“Every time I hear the words Post-pandemic I do a double take,” he said. “The only people for whom the pandemic is over are in the ground.

“It’s certainly not over for the disabled and the aged and those with long COVID. And as much as you want to think so, it is not over for you.”

However, Vipond concluded, “I want to end on some note of hope, some affirmation that it’ll all be OK, that we just have to do ‘X’ to make it all better. But it’s going to take work. It’s going to be uncomfortable, as everyone needs to step into roles we previously have left to others: The advocate, the activist.

“We need to advocate for what is right and what is true. We need to become politically engaged because that is how we get good leaders. We need to support each other, because this road will be long, and hard.