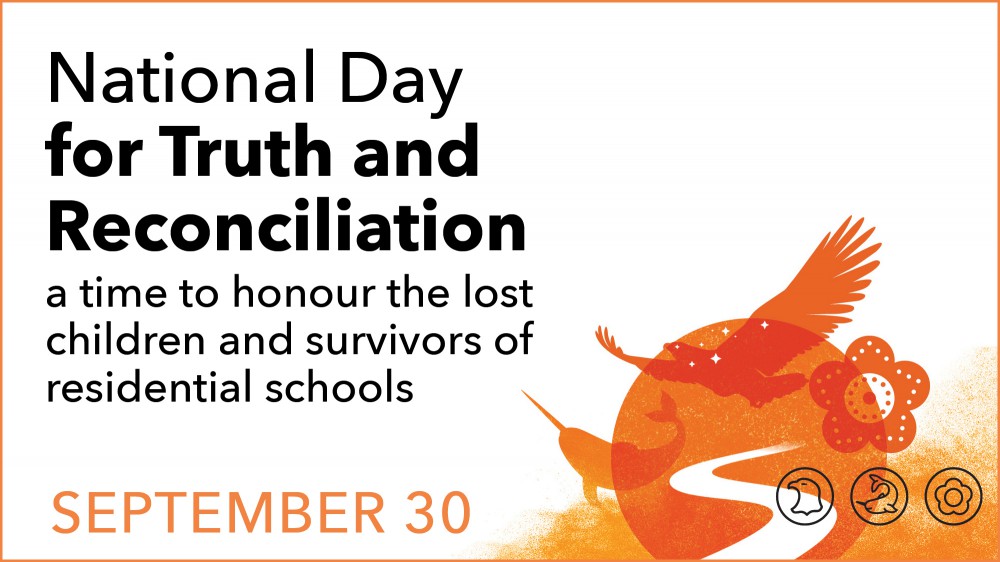 September 30 is the National Day for Truth and Reconciliation.

The day was created to give Canadians a chance to reflect on the tragic and painful history and ongoing impacts of residential schools and honour children who died, as well as the survivors, their families and communities.

Sept. 30 is also Orange Shirt Day, a day during which Canadians are invited to wear orange shirts to honour survivors of residential schools, their families, and their communities.

Orange Shirt Day is an Indigenous-led commemorative day honouring the children who survived residential schools and remembering those who did not. This day relates to the experience of Phyllis Webstad on her first day of school, where she arrived dressed in a new orange shirt, which was taken from her.

The orange shirt is now a symbol of the stripping away of culture, freedom and self-esteem experienced by Indigenous children over generations.

United Nurses of Alberta encourages its members to take time on Sept. 30 to learn more about the dark history of residential schools, as well as Indigenous culture and history, and reflect on the 94 Calls to Action included in the final report of the Truth and Reconciliation Commission.

UNA is committed to reconciliation with Indigenous peoples in Canada and acknowledges that it requires real action on the part of the union and all Canadians, in addition to symbolic activities such as land acknowledgements.

UNA’s Executive Board endorsed a position statement on Indigenous Health and the Truth and Reconciliation Commission, which committed to UNA recognizing the historical fact that Canada’s colonial mission was predicated upon the cultural genocide of Indigenous people.

The Sept. 30 statutory holiday applies to all federal employees and workers in federally regulated workplaces. United Nurses of Alberta and Alberta Health Services reached agreement in July to recognize the National Day for Truth and Reconciliation as a named holiday for full-time employees.

UNA’s position statement on Indigenous Health and the Truth and Reconciliation Commission, passed by the Executive Board in June 2017, says that “UNA recognizes the historical fact that Canada’s colonial mission was predicated upon the cultural genocide of Indigenous people as has been incontrovertibly established by the Truth and Reconciliation Commission of Canada.

“UNA recognizes the establishment of the Indian residential school and the segregated Indian hospital systems were the preeminent components of that colonial mission and caused deliberate irreparable and ongoing damage to the health and well-being of the indigenous population.

“UNA supports the United Nation Declaration on the Rights of Indigenous Peoples.

18. We call upon the federal, provincial, territorial, and Aboriginal governments to acknowledge that the current state of Aboriginal health in Canada is a direct result of previous Canadian government policies, including residential schools, and to recognize and implement the health-care rights of Aboriginal people as identified in international law, constitutional law, and under the Treaties.

19. We call upon the federal government, in consultation with Aboriginal peoples, to establish measurable goals to identify and close the gaps in health outcomes between Aboriginal and non-Aboriginal communities, and to publish annual progress reports and assess long-term trends. Such efforts would focus on indicators such as: infant mortality, maternal health, suicide, mental health, addictions, life expectancy, birth rates, infant and child health issues, chronic diseases, illness and injury incidence, and the availability of appropriate health services.

21. We call upon the federal government to provide sustainable funding for existing and new Aboriginal healing centres to address the physical, mental, emotional, and spiritual harms caused by residential schools, and to ensure that the funding of healing centres in Nunavut and the Northwest Territories is a priority.

23. We call upon all levels of government to:

i. Increase the number of Aboriginal professionals working in the health-care field.

24. We call upon medical and nursing schools in Canada to require all students to take a course dealing with Aboriginal health issues, including the history and legacy of residential schools, the United Nations Declaration on the Rights of Indigenous Peoples, Treaties and Aboriginal rights, and Indigenous teachings and practices. This will require skills-based training in intercultural competency, conflict resolution, human rights, and anti-racism.