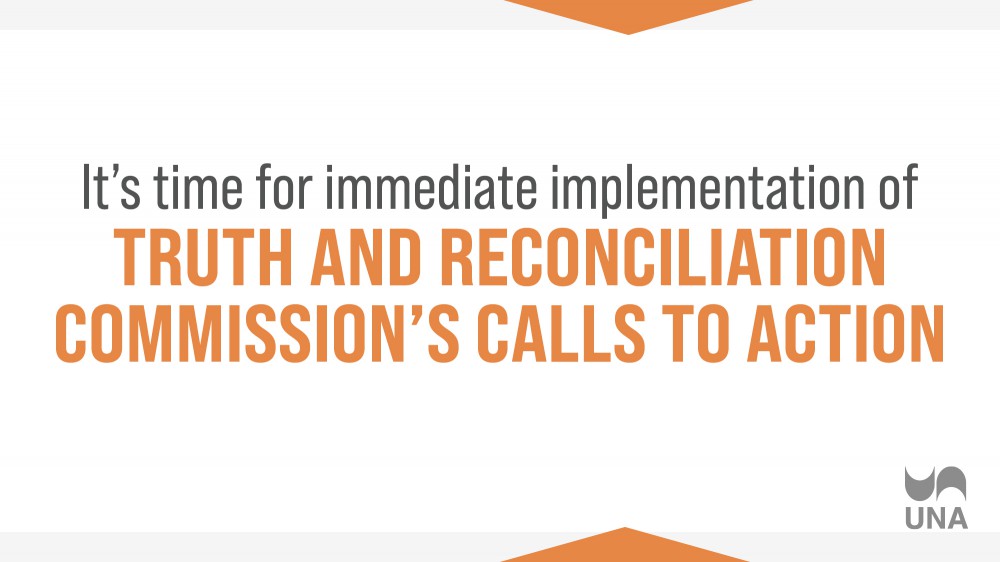 In light of the horrifying discovery of the remains of large numbers of children at the sites of so-called residential schools in Canada and the expectation there will be many more found in the days and months ahead, United Nurses of Alberta urges swift implementation of the Truth and Reconciliation Commission’s Calls to Action dealing with missing children and burial information.

“It has been since 2015 that the 94 calls to action contained in Commissioner Murray Sinclair’s report were published and progress to date on implementing them has been disappointingly slow,” said UNA President Heather Smith.

Smith said the reminder in recent days of the role of neglect and likely criminal culpability in the tragedy of the residential school system, shows the need for the Government of Canada, Canadian provincial governments, and other responsible parties to immediately implement Calls to Action Nos. 71 to 76, which deal with missing children and burial information.

UNA is committed to reconciliation with Indigenous peoples in Canada and acknowledges that it requires real action on the part of all Canadians, in addition to symbolic activities such as land acknowledgements, she said. In June 2017, UNA’s Executive Board passed a position statement on Indigenous Health and the Truth and Reconciliation Commission, which stated that UNA recognizes the historical fact that Canada’s colonial mission was predicated upon the cultural genocide of Indigenous people.

The Commission’s Calls to Action dealing with missing children and burial information are as follows:

71. We call upon all chief coroners and provincial vital statistics agencies that have not provided to the Truth and Reconciliation Commission of Canada their records on the deaths of Aboriginal children in the care of residential school authorities to make these documents available to the National Centre for Truth and Reconciliation.

74. We call upon the federal government to work with the churches and Aboriginal community leaders to inform the families of children who died at residential schools of the child’s burial location, and to respond to families’ wishes for appropriate commemoration ceremonies and markers, and reburial in home communities where requested.

75. We call upon the federal government to work with provincial, territorial, and municipal governments, churches, Aboriginal communities, former residential school students, and current landowners to develop and implement strategies and procedures for the ongoing identification, documentation, maintenance, commemoration, and protection of residential school cemeteries or other sites at which residential school children were buried. This is to include the provision of appropriate memorial ceremonies and commemorative markers to honour the deceased children.

76. We call upon the parties engaged in the work of documenting, maintaining, commemorating, and protecting residential school cemeteries to adopt strategies in accordance with the following principles:

UNA’s position statement on Indigenous Health and the Truth and Reconciliation Commission, passed by the Executive Board in June 2017, says that “UNA recognizes the historical fact that Canada’s colonial mission was predicated upon the cultural genocide of Indigenous people as has been incontrovertibly established by the Truth and Reconciliation Commission of Canada.

“UNA recognizes the establishment of the Indian residential school and the segregated Indian hospital systems were the preeminent components of that colonial mission and caused deliberate irreparable and ongoing damage to the health and well-being of the indigenous population.

“UNA supports the United Nation Declaration on the Rights of Indigenous Peoples.

18. We call upon the federal, provincial, territorial, and Aboriginal governments to acknowledge that the current state of Aboriginal health in Canada is a direct result of previous Canadian government policies, including residential schools, and to recognize and implement the health-care rights of Aboriginal people as identified in international law, constitutional law, and under the Treaties.

19. We call upon the federal government, in consultation with Aboriginal peoples, to establish measurable goals to identify and close the gaps in health outcomes between Aboriginal and non-Aboriginal communities, and to publish annual progress reports and assess long-term trends. Such efforts would focus on indicators such as: infant mortality, maternal health, suicide, mental health, addictions, life expectancy, birth rates, infant and child health issues, chronic diseases, illness and injury incidence, and the availability of appropriate health services.

21. We call upon the federal government to provide sustainable funding for existing and new Aboriginal healing centres to address the physical, mental, emotional, and spiritual harms caused by residential schools, and to ensure that the funding of healing centres in Nunavut and the Northwest Territories is a priority.

23. We call upon all levels of government to:

i. Increase the number of Aboriginal professionals working in the health-care field.

24. We call upon medical and nursing schools in Canada to require all students to take a course dealing with Aboriginal health issues, including the history and legacy of residential schools, the United Nations Declaration on the Rights of Indigenous Peoples, Treaties and Aboriginal rights, and Indigenous teachings and practices. This will require skills-based training in intercultural competency, conflict resolution, human rights, and anti-racism.