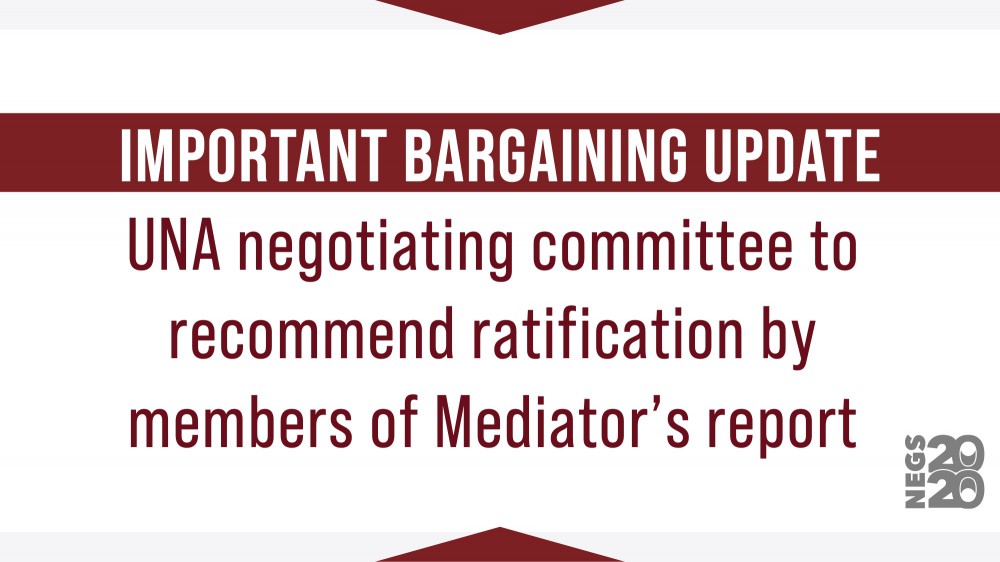 The United Nurses of Alberta negotiating committee has called for the union’s members to ratify the recommendations by Mediator Lyle Kanee for a new collective agreement with Alberta Health Services and other health care employers.

The Mediator’s recommendations include pay increases over the life of the four-year collective agreement amounting to 4.25 per cent. The term of the agreement will be from April 1, 2020, to March 31, 2024.

Upon ratification, current semi-annual lump-sum payments will be converted to the wage grid. In addition, there is also a one-time lump sum payment of 1 per cent for 2021 in recognition of nurses’ contribution during the pandemic.

Other improvements include enhanced psychological supports, creation of a union-employer provincial workload advisory committee, and implementation of a Rural Capacity Investment Fund. The fund will allocate $5 million a year to recruitment and retention strategies in rural and remote areas of the province, and $2.5 million a year for relocation assistance.

“This agreement recognizes the hard work and sacrifices of Alberta’s Registered Nurses and Registered Psychiatric Nurses throughout the pandemic,” said UNA President Heather Smith. “Our members and their colleagues have been holding Alberta’s health care system together, and it is relief to have reached an agreement with the assistance of the government-appointed Mediator.”

UNA Labour Relations Director David Harrigan, who led the negotiating committee in collective bargaining and Mediation, said this round of negotiations has been the most difficult in his more than three decades with the union.

“We are glad Alberta Health Services was prepared to move away from its initial demands for wage cuts and to drop its efforts to impose more than 200 rollbacks,” Harrigan said. “The bargaining committee feels strongly this agreement will benefit all UNA members and also be fair to the people of Alberta.

“We thank Mediator Kanee for his hard work bringing the parties together to reach this agreement,” Harrigan added.

The UNA Negotiating Committee presented the Mediator’s report to the executive members of affected locals in a virtual meeting on Tuesday evening.

The contents of the Mediator’s report will be presented formally to the members at a virtual Reporting Meeting on January 7, 2022.

A ratification vote is scheduled to take place online on Janurary 25 and 26, 2022.

In addition to RNs and RPNs employed by AHS, the agreement covers those employed by Covenant Health, Lamont Health Care and The Bethany Group (Camrose). UNA represents more than 30,000 RNs and RPNs in Alberta, plus some allied health care workers.