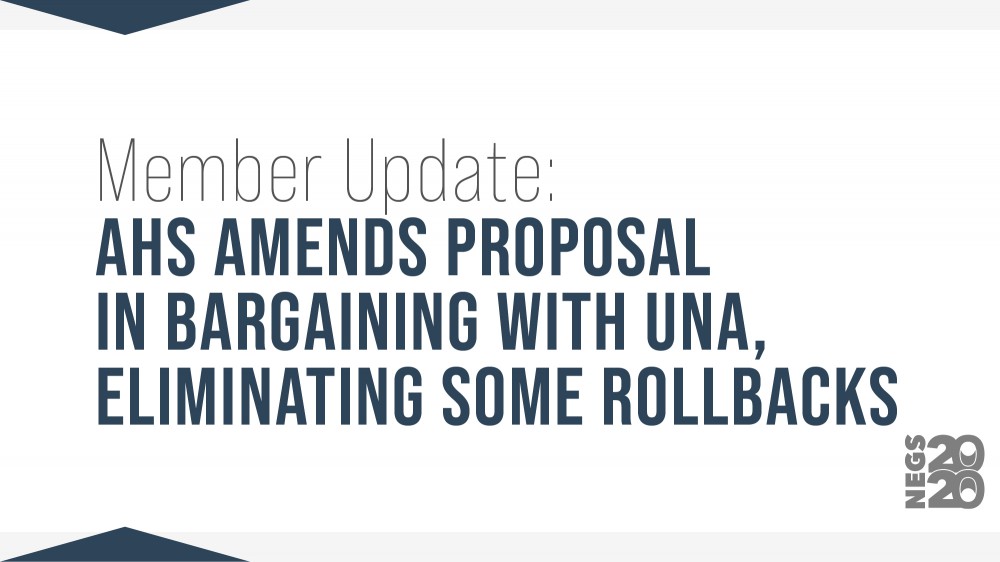 A new Alberta Health Services proposal to United Nurses of Alberta today represents progress in negotiations for a new collective agreement but still includes several serious rollbacks, including a proposal that would amount to an immediate 2-per-cent pay cut for UNA members.

AHS negotiators contacted the union on the long weekend to say they had a new mandate from the government to amend their bargaining proposals before commencing formal mediation under Section 64 of the Alberta Labour Relations Code.

The new employer bargaining position drops several offensive rollbacks AHS has been demanding, including a 3-per-cent across-the-board cut to the salary appendix immediately upon ratification of a new agreement followed by three years with no pay increases, reductions of shift differentials and other pay premiums, elimination of “superstat” holidays, and elimination of designated days of rest for part-time employees.

However, the AHS proposal maintains the employer’s demand for elimination of lump-sum payments, which would cost UNA members 2 per cent a year in pay, and a letter of understanding that would take away important scheduling protections for nurses.

The employer now proposes a pay freeze for the first three years of a five-year collective agreement followed by increases of 1 per cent in each of the final two years of the contract.

While the changes in the today’s new proposal do represent an improvement in the employer’s bargaining position, they would do nothing to address the critical problem of attrition and retention now faced by Alberta Health Services throughout the province.

Recent moves by AHS to hire contract nurses from out of province at much higher pay rates than those in UNA’s collective agreement show that the problem faced by AHS is chronic, year-round, and province-wide, not primarily experienced in rural areas or only as a result of the COVID-19 pandemic and seasonal staff vacations.

Continuing its effort to roll back nurses’ pay and eliminating scheduling protections for nurses in a period when the system is under stress and health care workers are suffering from burnout and exhaustion will not help AHS solve its staffing problems and would likely make the current situation worse, considering the growing national and international nursing shortage.

UNA will meet with the mediator on Friday and looks forward to his assistance resolving these outstanding issues in ways that are fair to UNA members and will help the health system ease the impact of the crisis it is currently experiencing.