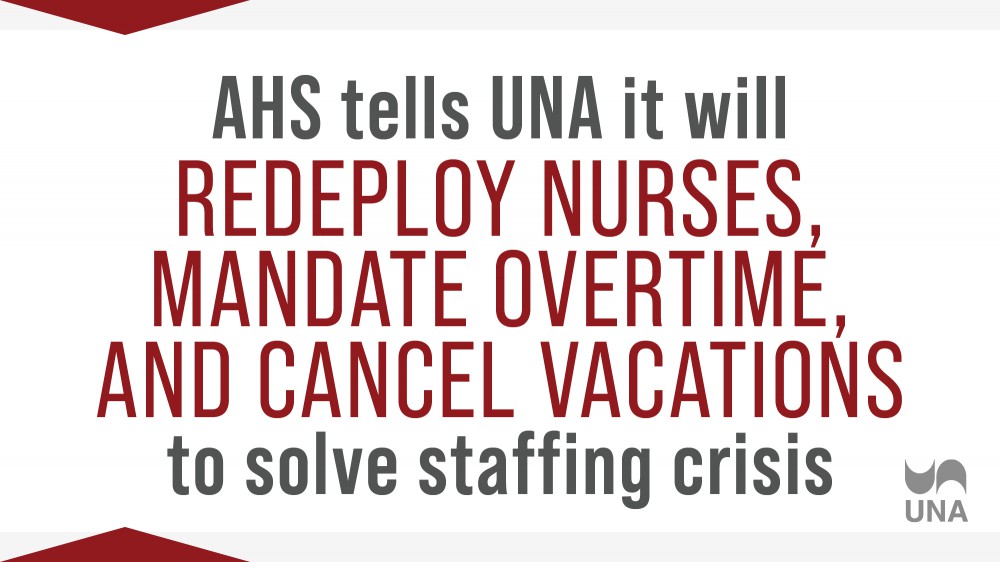 United Nurses of Alberta expects to file a grievance and seek damages from Alberta Health Services after it received notice from the employer earlier today it intends once again to use the emergency provisions of its collective agreement to solve “significant staffing issues.”

“Further to our previous notifications that we would be using the emergency provisions of the collective agreements, we want to let you know that the situation has progressed and created additional pressures throughout the healthcare system, with the most impacted areas at this time being the Edmonton and South Zones,” Mann’s email said.

“While previous redeployment efforts largely focused on the Covid‐specific services such as Contact Tracing, Health Link and Vaccinations, these efforts will now need to be utilized in other areas of the organization that are feeling pressure due to increasing occupancy, acuity and staff absences,” he continued.

UNA Labour Relations Director David Harrigan has advised Mann that UNA does not believe the current situation meets the definition of emergency under the collective agreement.

Harrigan noted that most medical professionals in Alberta have foreseen the problems now faced by AHS arising from a chronic shortage of nursing staff in Alberta health care facilities and the pressures of the fourth wave of the COVID-19 pandemic that were sure to arrive when the government and public health officials rushed to reopen the province too soon last month.

He noted that UNA members joined many public demonstrations to urge AHS and the government to take reasonable remedial steps to deal with the impact of a fourth wave of the coronavirus.

UNA will remind its members that the principle they should the work now and grieve later remains in effect, Harrigan said.