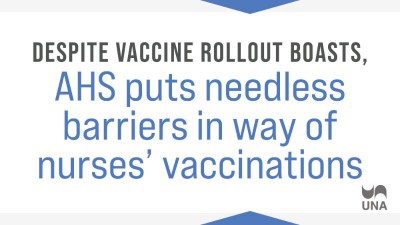 Despite the Government of Alberta news release boasting about Alberta’s vaccine rollout for health care workers, Alberta Health Services is putting needless barriers in the way of nurses being vaccinated.

As a result, United Nurses of Alberta has filed a grievance against Alberta Health Services for a new policy requiring employees to use unpaid leave or vacation time to be vaccinated against COVID-19.

“UNA’s provincial Collective Agreement with AHS and other employers has clear language indicating that medical appointments are, depending on the length of time needed, to be without loss of pay or charged against accumulated sick leave,” said David Harrigan, the union’s director of labour relations.

“It appears that this is being done in retaliation for UNA’s decision to decline to agree to the employer’s request to renew a Memorandum of Agreement that includes a pause on bargaining,” Harrigan said.

“In addition to being unfair, unreasonable, discriminatory and a violation of the collective agreement, by placing barriers to having health care workers vaccinated, the employer is putting the health, safety and lives of Albertans at risk,” he stated. “Putting up barriers to vaccination shouldn’t be used as a labour relations tactic.”