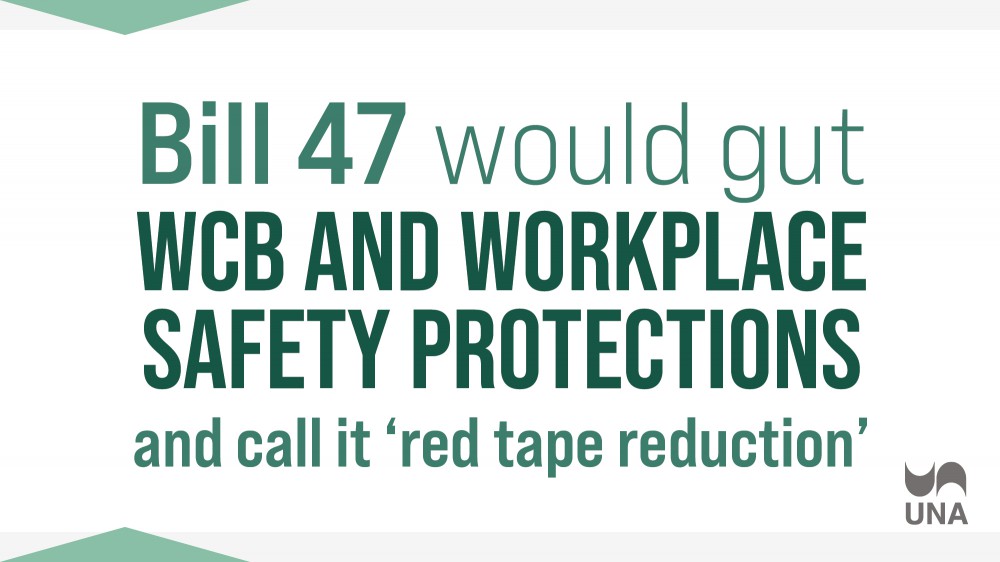 Legislation tabled in November by the Kenney Government effectively guts Workers Compensation and workplace safety protection in the guise of reducing “red tape.”

Introduced on November 5, the omnibus bill clearly puts employer profits ahead of workers’ health and safety and would return the Workers Compensation Board to a corporate model that denies many injured workers compensation to which they are entitled.

When passed, the legislation will mean workers are more vulnerable to injury and death on the job, and will have less access to the sup[port they need if they are injured.

Amendments to the Workers Compensation Act include removing the legal requirement for employers to reinstate an injured worker, capping the amount an injured worker can receive, ending presumptive coverage for psychological injuries for most workers, and closing the Fair Practices Office — the only place for most injured workers to receive support with navigating the system.

Capping insurable earnings punishes workers in higher-earning occupations such as construction or oil and gas by reducing their compensation for injuries, and deprives them of the guarantee they will be reinstated by their employer when they recover.

This appears to be is a deliberate attempt to drive down WCB costs at the expense of injured workers.

The UCP’s strategy of replacing the entire Occupational Health and Safety Act makes it difficult to make comparisons and understand exactly what safety protections for workers are being lost. However, it’s clear that the most concerning proposed change is the limiting of a worker’s right to refuse unsafe work, a crucial lifesaving right.

The new legislation eliminates the requirement to pay workers at the applicable rate to attend and prepare for joint worksite health and safety committees, investigations and training, undoing an arbitration won by UNA requiring employers to pay in such circumstances.