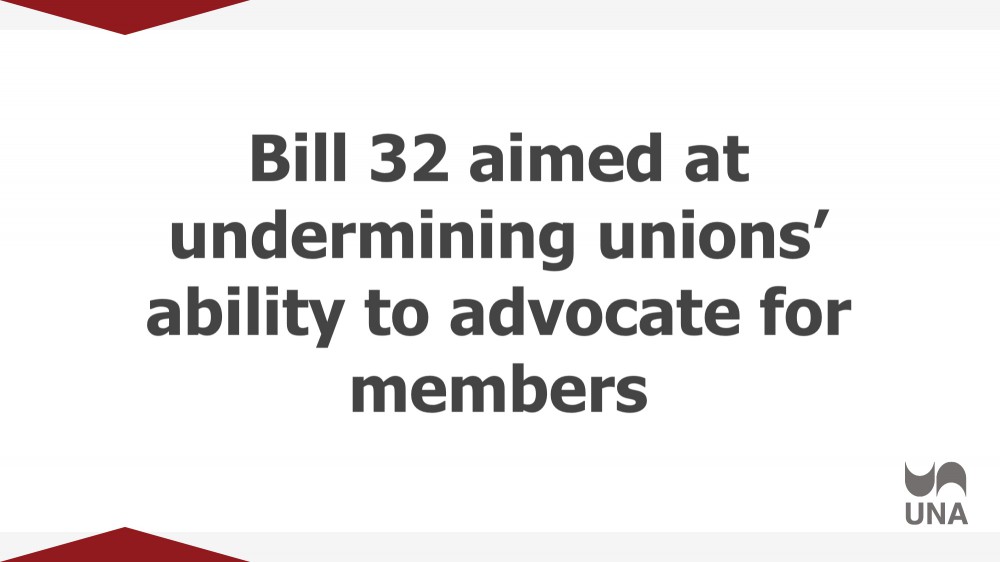 A UCP government bill introduced today is aimed at undermining the ability of unions to advocate on behalf of their members on issues like the privatization of health care, the creation of a national pharmacare program, and the protection of pensions.

Bill 32, the Restoring Balance in the Workplace Act, is an attempt to make it difficult for nurses in Alberta to advocate on public interest issues that improve conditions for their members, their patients, and their communities in and out of the workplace.

“The UCP is clearly trying to limit the ability of nurses and their union to stand up against a government that would privatize health care and jeopardize their retirement security,” said United Nurses of Alberta President Heather Smith.

Bill 32 would make Alberta the only jurisdiction in Canada to require union members to opt-in to having a portion of their dues go to "political activities.”

“UNA members set their union’s priorities and actions and elect representatives to carry out those directions,” said Smith.  “Bill 32 creates an unnecessary administrative burden for unions and interferes in a democratic process that is determined by our members.”

The bill would require unions to prepare financial statements for their membership to detail where funds are directed. However, this is already a current practice in UNA, as yearly budgets are presented at annual general meetings and are available to any member who requests it.

“Despite the UCP government’s attempts to weaken unions in Alberta, UNA will not hesitate to take the measures we determine are necessary to advocate for policies we believe will improve the public health care system and we will vigorously oppose policies that have a negative impact on patient care, our membership and the nursing profession,” said Smith.

For more than four decades, UNA has advocated for a robust publicly funded and publicly delivered health care system. Given that Premier Jason Kenney has introduced sweeping changes to increase health care privatization in Bill 30, it is no surprise that his government wants to silence those who know the system best: Alberta's nurses.

UNA will be taking time to thoroughly examine Bill 32 and its impact on UNA members. Further updates will be posted at una.ca.

United Nurses of Alberta is the union for more than 30,000 Registered Nurses, Registered Psychiatric Nurses and allied workers in Alberta. Since 1977, UNA has been an effective advocate for nurses, the nursing profession and Canada’s fair and efficient public health care system.