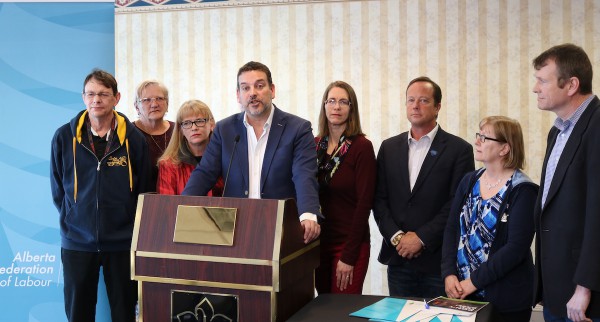 Changes included in Alberta legislation that came into force at the end of February open the way for the United Conservative Party Government to use Alberta public employees’ pension savings to invest in oil and gas projects that are having trouble attracting private investors, a report by the Alberta Federation of Labour suggests.

Changes to legislation included in the Reform of Agencies, Boards and Commissions and Government Enterprises Act “undermine the independence of public sector pensions in Alberta and introduce an unprecedented level of political interference,” Alberta Federation of Labour President Gil McGowan told a news conference in Edmonton Tuesday.

The report — called Don’t You Dare! Why Working Albertans Don’t Trust Jason Kenney with Their Retirement Savings — argues that after the UCP transferred control of all provincial public service pension funds to the Alberta Investment Management Co., it then created a system that allows politicians to politically interfere with AIMCo’s business decisions.

The report points to the fact banks, investment firms and insurance companies are all becoming more cautious about investment in oil and gas, raising the possibility the government might gamble with the savings of 350,000 working and retired Albertans.

McGowan called for the government to repeal parts of Bill 22 that prevent pension plans from properly managing themselves.

Meanwhile, Alberta’s former NDP Labour Minister announced she would introduce a Private Member’s Bill to restore pension rights lost when the UCP passed Bill 22, the Reform of Agencies, Boards and Commissions and Government Enterprises Act, as well as to prevent the government from withdrawing from the Canada Pension Plan.

Edmonton-Mill Woods MLA Christina Gray said her Act to Restore and Protect Alberta Worker Pension Rights would, among other things, establish in law that pension assets are the property of the workers — not the government.

UNA President Heather Smith said, “We support legislation that will return the pension plan independence promised by the Progressive Conservatives in 1992 and taken away by the UCP in 2019. We want the ability to protect our assets from Government interference.”

Gray said an analysis by pension expert Keith Ambachtsheer concluded that withdrawing from the CPP would come with significant cost and serious long-term risks that could endanger the retirement of every single Albertan, particularly young Albertans.