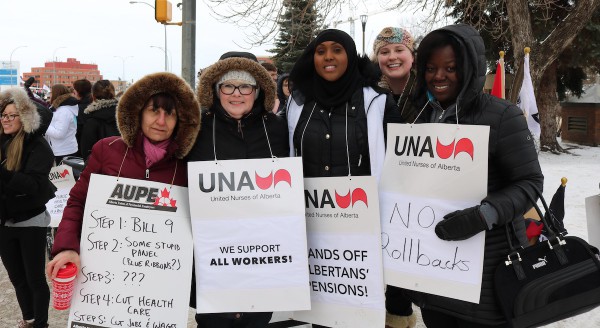 UNA members were joined by members of other unions, including AUPE and HSAA, at the Royal Alexandra Hospital and other locations across the province.

Members of United Nurses of Alberta sent a pre-Valentine’s Day message on Feb. 13, 2020 of their commitment to Albertans and our province’s public health care system.

The information walks were held to show support for publicly delivered health care and all the front-line workers who make it happen. Most Alberta health care workers including UNA members are facing the possibility of layoffs and major rollbacks of contract provisions. As many as 750 RNs and RPNs could be laid off in the next year in downsizing planned by Alberta Health Services.

UNA members’ Valentine’s message to the people of Alberta was this: Health care workers like nurses are the heart of Alberta’s health care system, which is the envy of the world. Don’t let our government cut the heart out of health care!