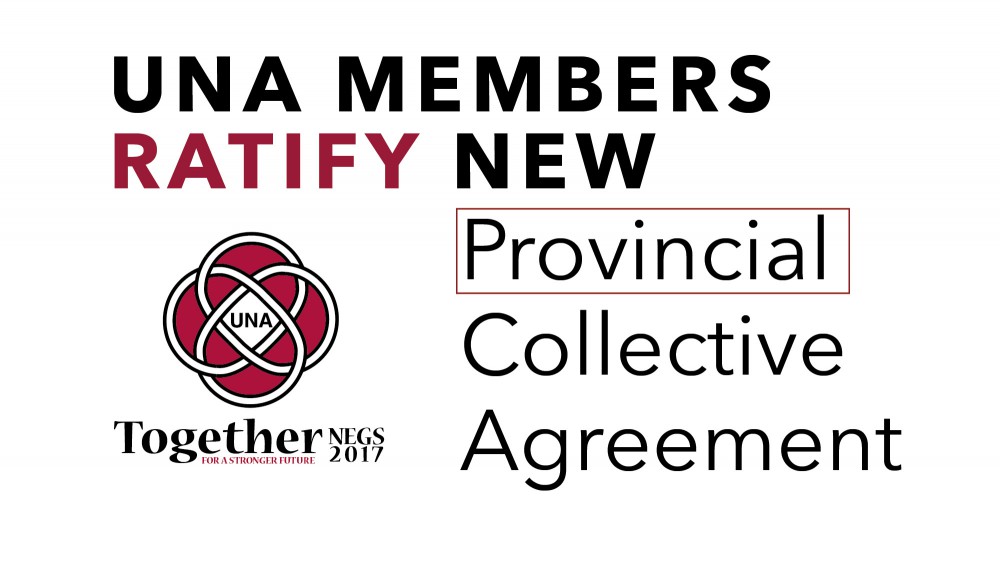 UNA
“
“This agreement recognizes the reality of the economic climate of the province and provides strong employment protection for nurses.” - Heather Smith, President, UNA
”

Eligible members of the United Nurses of Alberta overwhelmingly ratified a new Provincial Collective Agreement in worksite voting throughout the province yesterday.

Voting by secret ballot on the groundbreaking agreement, which provides job security for nurses and an effective mechanism for dealing with concerns of patient care, took place at UNA worksites across Alberta throughout the day yesterday. Ballots were tallied at UNA’s Provincial Office in Edmonton this morning.

Close to 90 per cent of UNA members participating in the vote indicated they are in favour of ratifying the agreement, and more than 98 per cent of UNA’s locals ratified the new contract.

The three-year agreement contains no wage increases in the first two years, but includes a provision to renegotiate wages in the third year. The agreement also includes stronger job-security and Professional Responsibility language and many other important language improvements.

“This agreement recognizes the reality of the economic climate of the province and provides strong employment protection for nurses,” said UNA President Heather Smith after the ratification vote results were tabulated.

The agreement was earlier recommended by the UNA Bargaining Committee and by the more than 600 delegates from all affected locals at a day-long Reporting Meeting in Calgary on January 25. The delegates at the Reporting Meeting considered the tentative agreement, which reached through a combination of collective bargaining and mediation, in detail throughout that day.

To ensure job security, the agreement includes a very strongly worded Letter of Understanding stating there will be no involuntary layoffs of RNs or RPNs or involuntary reductions in their hours of work for the life of the agreement.

New and stronger Professional Responsibility Concern (PRC) language in the contract includes an external Independent Assessment Committee that can make recommendations to help resolve disputes over patient and Employee safety, as well as the ability to proceed to binding arbitration if the committee’s agreed-upon non-binding recommendations are rescinded or not implemented at any stage in the process.

Other important provisions include limits on the cycle of shift schedules to 12 weeks; improvements in language affecting leaves for maternity and adoption, critical illness of family members, disappearance of a child, domestic violence, union duties, and citizenship ceremonies; payment in lieu of named holidays; and on-call work for casual employees. The agreement also includes clearer definitions of “evening” and “night” shifts and many other technical improvements and clarifications.

UNA expects the agreement to be ratified by the AHS Board later today.