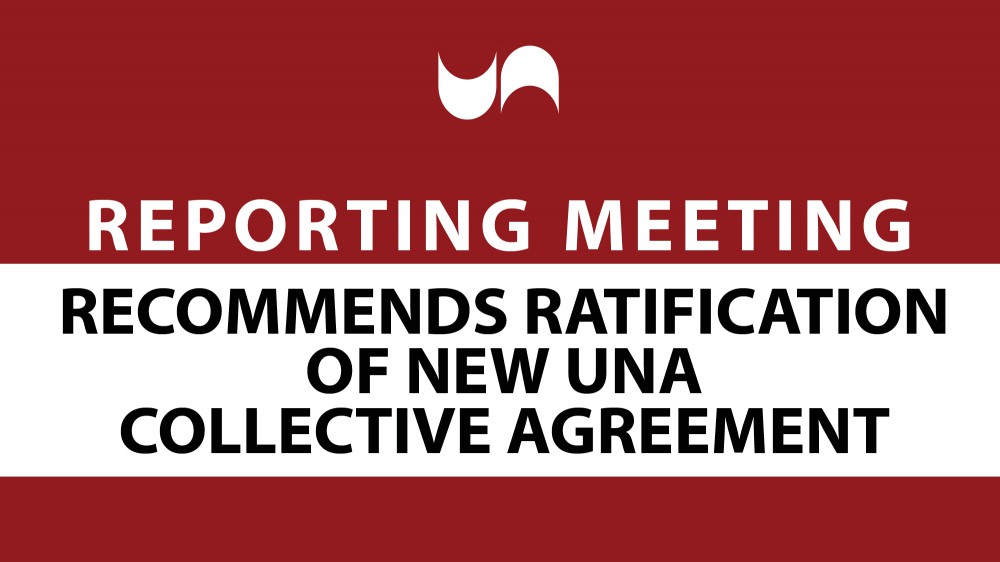 Delegates to the United Nurses of Alberta Reporting Meeting in Calgary on Thursday voted overwhelmingly to recommend ratification of a new Provincial Collective Agreement by eligible members of all affected locals.

The three-year collective agreement that was considered in detail by the more than 600 members from all affected UNA locals at the day-long meeting is a combination of agreed changes and the Mediator’s recommendations. The proposed agreement will expire the end of March 2020.

The recommended contract contains no wage increases in the first two years, and a provision to renegotiate wages in the third year.

The agreement also includes job security provisions for members covered by the collective agreement, stronger Professional Responsibility Concern language that includes an Independent Assessment Committee to help resolve disputes over patient and Employee safety, limits on the cycle of shift schedules to 12 weeks, and may other language improvements.

Delegates to the meeting passed a resolution calling for a ratification vote on February 15 by the membership of all locals representing Registered Nurses and Registered Psychiatric Nurses employed by Alberta Health Services, Covenant Health, Lamont Health Centre and The Bethany Group (Camrose).

Read the full details of all changes included in the Mediator’s recommendations.

To ensure job security, the agreement includes a Letter of Understanding there will be no involuntary reductions of FTE for the life of the agreement.

Improvements to the Professional Responsibility Concern process include an external Independent Assessment Committee that can make recommendations, and the ability to proceed to binding arbitration if the committee’s agreed-upon non-binding recommendations are rescinded or not implemented at any stage in the process.

Other improvements affect such contract provisions as leaves for maternity and adoption, critical illness of family members, disappearance of a child, domestic violence, union duties and citizenship ceremonies; payment in lieu of named holidays; on-call work for casual employees; clear definitions of “evening” and “night” shifts; and the restriction on the cycle of shift schedules to 12 weeks.

“We understand that some members were unhappy with the idea of a wage freeze, but under the province’s current economic circumstances and considering the state of the province’s finances we believe, and delegates to the Reporting Meeting very clearly strongly agreed, that this was a responsible and sensible approach,” said UNA President Heather Smith.