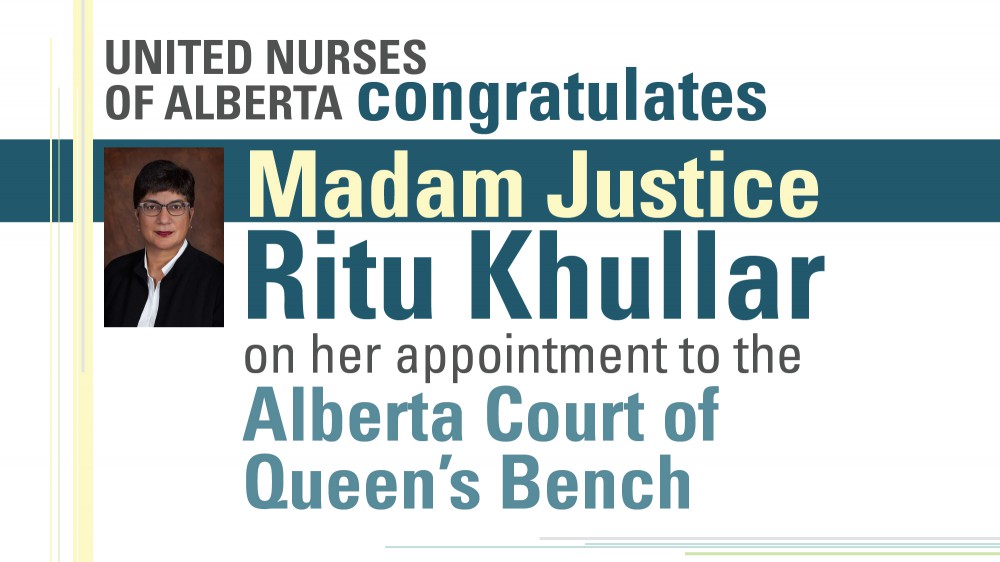 United Nurses of Alberta was delighted to learn today of the appointment of Edmonton lawyer Ritu Khullar, Q.C., to the Alberta Court of Queen’s Bench.

“It brings great pleasure to us to know this fine lawyer, whom we respect so much, will be known after today as Madam Justice Khullar,” UNA President Heather Smith said this afternoon. “She deserves our congratulations and our best wishes as she receives this great, and well deserved, honour.”

Justice Khullar has represented UNA in many cases, Smith noted, recently in the Supreme Court of Canada in December when the union received intervenor status in a case related to addictions in the workplace, an issue about which UNA has been advocating for many years.

UNA argued in that case that an addiction should be seen as a disability, not a condition for which a nurse should be punished by and employer or professional association.

Justice Khullar was born in Fort Vermillion to parents who had immigrated to Canada from India. She grew up in the town of Morinville, north of Edmonton.

Since 1998, Justice Khullar has practiced law in Edmonton with Chivers Carpenter, focusing on labour and employment, privacy, administrative, human rights, and constitutional law. She became managing partner of the firm in 2009.

Justice Khullar has also lectured at the University of Alberta and served on numerous committees of the Canadian Bar Association. She has acted in a pro bono capacity in numerous significant cases, including representing the Women’s Legal Education and Action Fund before the Supreme Court of Canada, the news release said.

She will sit on the Bench in Edmonton.

Justice Khullar was one of four judges appointed by Ottawa to the Alberta Court of Queen’s bench today. The others are Madam Justice Marilyn Slawinsky, who has been a judge of the Provincial Court of Alberta since the fall of 2015, Madam Justice Michele H. Hollins, a former president of the Canadian Bar Association and a partner with the firm of Dunphy Best Blocksom in Calgary, and Mr. Justice William T. deWit, best known as for a previous career as an Olympic and professional boxer. He has practiced law in Calgary for more than 20 years.

“These judges are desperately needed in Alberta and will improve access to justice for Albertans, while relieving pressures on our courts,” Alberta Justice Minister Kathleen Ganley.

The federal announcement includes funding for another 12 judges in Alberta.