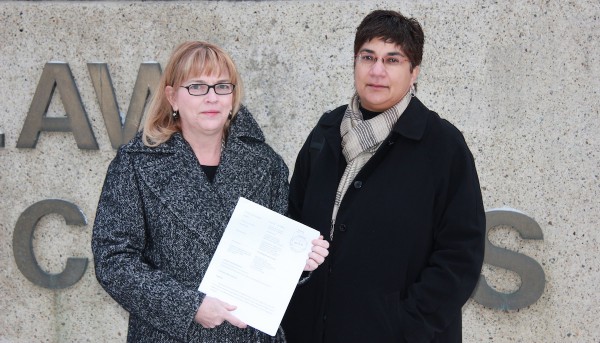 UNA President Heather Smith and lawyer Ritu Khullar filed a Statement of Claim against the Public Sector Services Continuation Act at the the Alberta Court of Queen's Bench today.

Alberta’s new Public Sector Services Continuation Act violates fundamental freedoms protected by the Charter of Rights and the province’s ban on all public sector strikes also breaches the Charter, United Nurses of Alberta argues in a statement of claim filed today with the Alberta Court of Queen’s Bench.

UNA is seeking a declaration from the court that because parts of the Public Sector Services Continuation Act, widely known as Bill 45, and the Alberta Labour Relations Code violate sections of the Canadian Charter of Rights and Freedoms they are of no force or effect.

While other legal challenges have commenced about other recent Alberta labour bills, this is the first direct challenge to Bill 45.

The statement of claim argues portions of the Public Sector Services Continuation Act and the blanket ban on strikes by large swaths of public employees in the Code violate the following fundamental freedoms guaranteed by the Charter to affected members and executives and officers of the union:

In addition, the statement of claim argues that Bill 45 violates the guarantees to individuals in the Alberta Bill of Rights of liberty, security of the person and enjoyment of property, and the right not to be deprived of them except by due process of law. The statement of claim therefore also seeks a declaration by the court that these sections violate the Alberta Bill of Rights.

A copy of the statement of claim is attached.