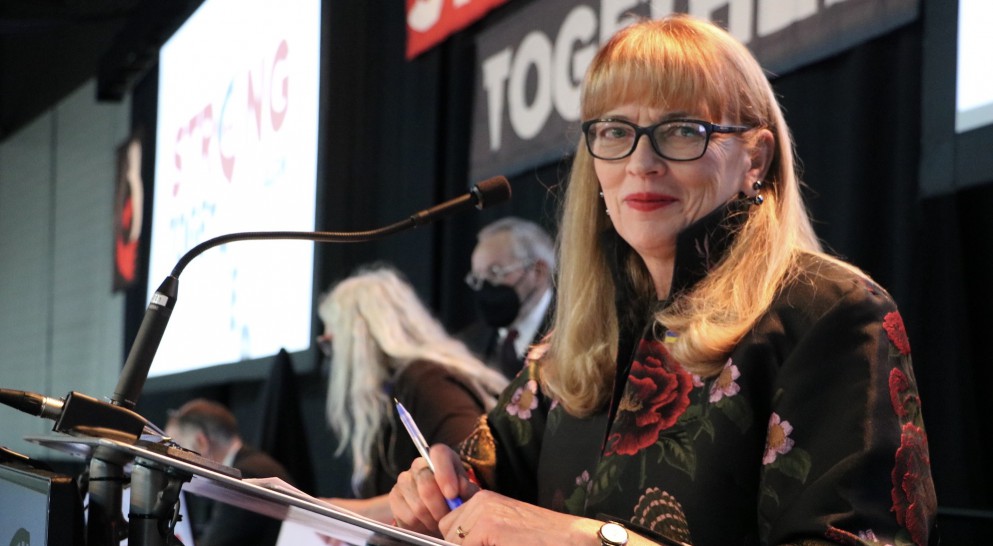 Governments including Alberta’s that are facing the worst nursing shortage in history are going to have to recognize that the law of supply and demand will impact what nurses are paid, United Nurses of Alberta President Heather Smith told the union’s first in-person annual general meeting in three years today.

“Our governments have to face the fact that they have to pay nurses more in Alberta,” Smith told more than 800 delegates, guests and staff – all masked in response to the continuing COVID pandemic – at the EXPO Centre in Edmonton in her report this morning.

If they don’t, she said to applause, “Alberta nurses are going to go away and work somewhere else!”

Looking back to UNA’s tough negotiations with Alberta Health Services and other employers in 2020 and 2021, the UNA president asked, “Isn’t it ironic that market-driven governments that are always touting the benefits of the private sector don’t want to acknowledge that shortages of nurses drive up nurses’ salaries!”

“It would have been funny if it hadn’t been tragic that our Alberta government went into our last round of collective bargaining just as the pandemic was beginning trying to squeeze wage rollbacks out of you,” she said.

“Well, we proved that we are strong together,” Smith said, repeating the theme of the AGM. “But we will be back in negotiations soon, as we always are, and our government, whatever government that is, is going to have to recognize that they are going to have to pay nurses what they’re worth.

“We are not sisters of charity,” she said. Nurses, the backbone of the health care system, have wisdom and experience about health care to contribute. “We deserve to be paid what we’re worth for our contribution to society.”

Recalling a recent meeting with Justin Trudeau, Smith said she told the prime minister that Canada’s health care system “is ill, but it’s not terminal.”

It won’t be fixed by taking nurses out of the public system and transferring them to private clinics – on the contrary, that will make lines longer and the crisis more severe.

Moreover, “it cannot be fixed by pretending we can solve our staffing problems in Alberta, which our own governments have created in Alberta, by importing nurses holus-bolus from other countries and relying on others to educate the professionals we need!”

So what can we do? Smith asked. “The Alberta government may not like to hear this, but this crisis needs to be treated as a national priority, with federal funds for education and upgrading.

“We need to expand nursing programs here in Alberta to raise up a new generation of RNs, RPNs, and LPNs – and we need to do it quickly.”

Tuition needs to reflect the need, Smith said, not the desire of governments to underfund post-secondary education, just as they underfund public health care. “To be clear, tuition for nursing students needs to cost less, not more.”

Smith called for planning at the provincial or federal level to alleviate the crisis in health care to reflect the reality public health care does a better job than privatized health care, with its built-in need to finance profit margins.

“It makes no sense to pay the private sector to do a job that public employees, working in public facilities do better, for less!”