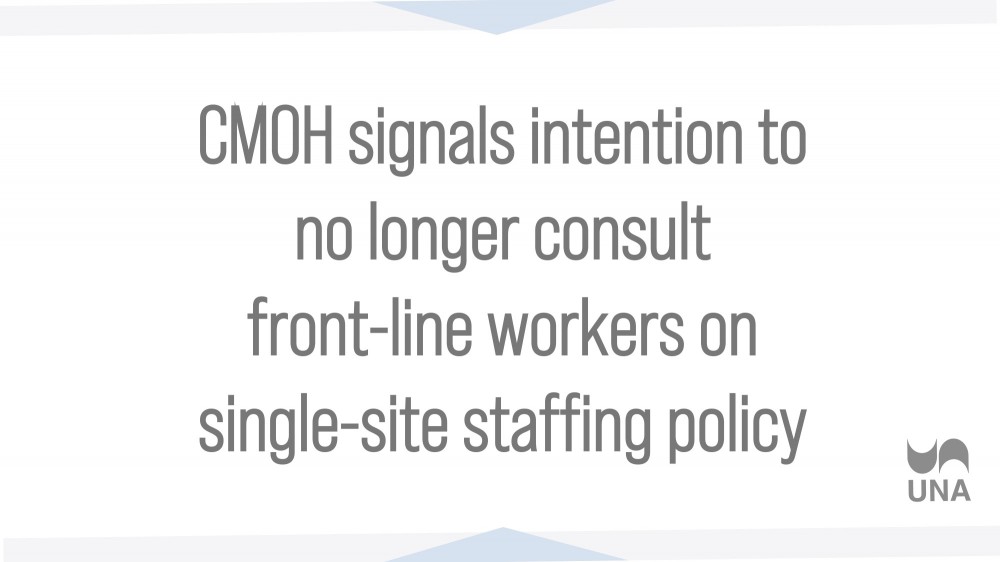 Alberta health care unions have been deeply involved in the implementation of the policy since early months of the pandemic. Talks on implementing the single-site order began in April 2020. Talks on how to eliminate the order began in July 2020 and concluded in November 2021.

Hinshaw has now signalled her intention to proceed ahead of schedule and consult only with care facility operators, their commercial association, and Alberta Health Services staff.

Responding to a query by United Nurses of Alberta Labour Relations Director David Harrigan about the timing of her plan to move away from the single-site staffing policy, which was put in place to prevent the spread of COVID-19 between worksites by infected health care workers, Hinshaw indicated she is likely to lift the order early in February.

“Because of staffing challenges in continuing care, operators are signaling the need to consider lifting all or some the restrictions potentially sooner than February 16, 2022, in order to access staff to fill gaps created by Omicron-related absences and enable the onsite re-orientation of staff that will be returning to their work site(s) after a near two year absence,” Hinshaw wrote in an email addressed to Harrigan.

In Hinshaw’s response to Harrigan, the chief medical officer of health said an advisory team made up only of “continuing care association leads and operator representatives” plus AHS zone leads, human resources representatives, and other officials had been set up “to monitor the process of returning staff to their previous positions and report on any emerging challenges from the field.”

Union representatives were not invited, and there is no indication Dr. Hinshaw is interested in continuing the consultative role unions like UNA have played from the start.

“It is very troubling that the chief medical officer of health apparently plans to cut out the front-line professionals who understand the infection-control needs of their workplaces,” said UNA President Heather Smith.

“Allowing workers at multiple sites may save money training new employees, but it brings with it the high risks of heightened illness and death rates among vulnerable people in care,” she added.

Smith noted that the outbreak of Severe Acute Respiratory Syndrome in 2003 shows that allowing workers to move between worksites is a recipe for spreading infection. “Dr. Hinshaw needs to reconsider this policy.”

In her email, Hinshaw expressed “confidence in the suite of many protective measures in place in continuing care facilities to lessen the introduction and transmission of COVID-19, above and beyond the single site staffing restriction.”

Harrigan suggested such confidence is misplaced and the policy seems intended to maximize private-sector profits rather than ensure the safety of elderly and other vulnerable people in care.