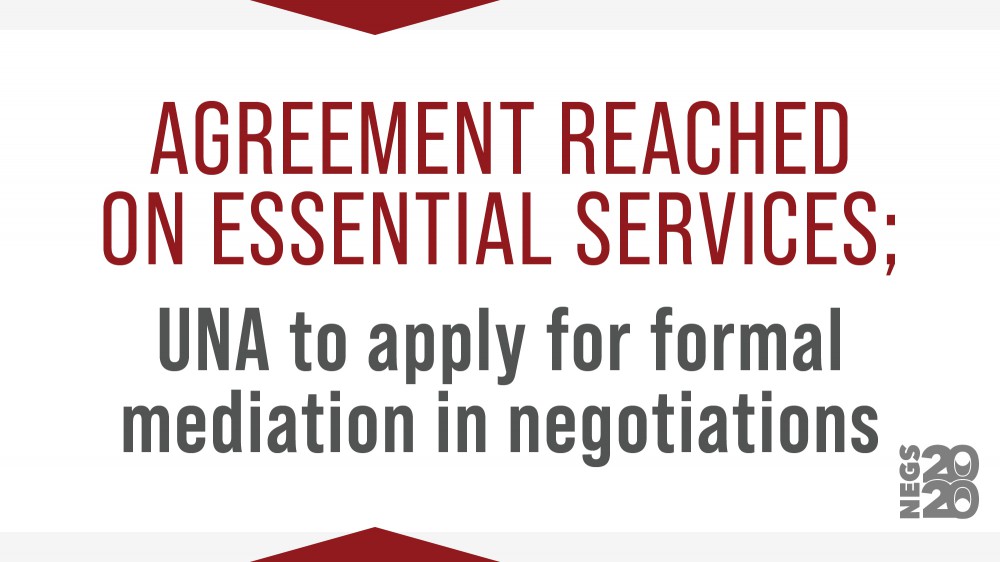 “
UNA's Local presidents told the union's Bargaining Committee to apply for formal mediation under Section 65 of the Alberta Labour Relations Code as quickly as possible.
”

The presidents of United Nurses of Alberta’s locals have met with the union’s Bargaining Committee and instructed it to proceed as quickly as possible to negotiate a new Provincial Collective Agreement with Alberta Health Services and other major public-sector health care employers.

The Local presidents’ instructions to their Bargaining Committee made it clear that rollbacks in member pay and long-established provisions of the collective agreement are not acceptable.

Accordingly, they told the Bargaining Committee to apply for formal mediation under Section 65 of the Alberta Labour Relations Code as quickly as possible.

To facilitate the process, the Bargaining Committee was instructed to withdraw all UNA proposals for essential services agreements and agree as a required step toward immediate mediation to accept all of the employer’s essential services staffing proposals.

In an email to AHS Senior Negotiator Raelene Fitz and other members of the employer Bargaining Committee yesterday, UNA Director of Labour Relations David Harrigan informed them that the union is cancelling a meeting scheduled for August 31 to negotiate essential services agreements at Royal Alexandra Hospital as it is no longer necessary.

“As a result, we have now reached agreement on Essential Services,” Harrigan stated. UNA will submit the agreement to the Commissioner today.

Harrigan noted that the bargaining history between AHS and UNA shows an established track record of making significant progress through formal mediation.

“We are hopeful that the Parties’ efforts will not be wasted in mediation,” he wrote, noting that both UNA and AHS have indicated a desire to reach an agreement, and the provincial government has stated that a new agreement with UNA is essential for the province. He said use of Section 65 mediation will allow for a timely resolution.

“But even if it does not lead to an agreement, it will allow the parties to exercise their strike or lockout rights,” Harrigan said.

Harrigan indicated that UNA would be happy to make a joint application for formal mediation with AHS, but if the employer does not wish to apply jointly, UNA will be making application on its own regardless, as allowed by the provincial Labour Code.