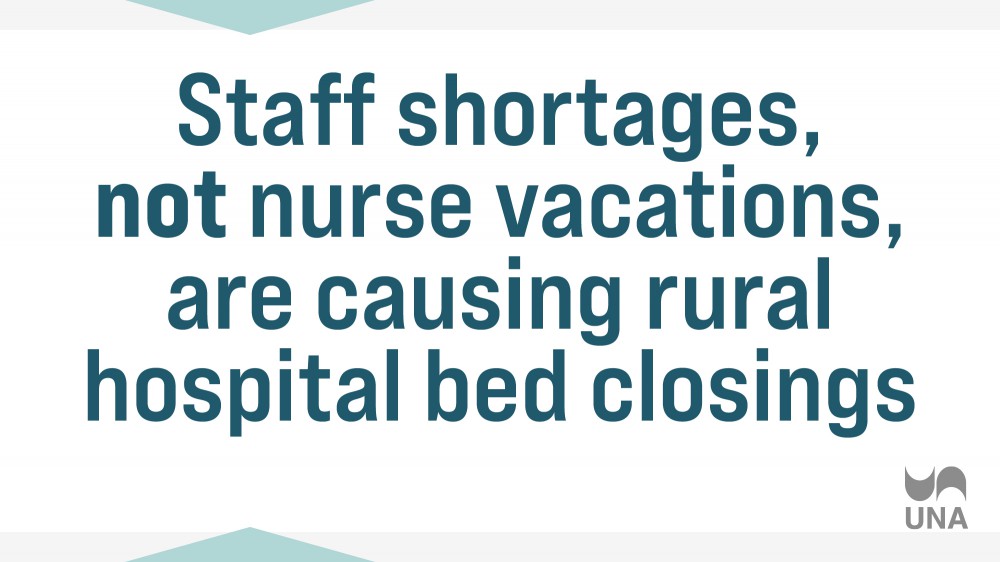 Health Minister Tyler Shandro caused an uproar yesterday when he responded to a question in the Legislature about the closings and diminished access to Emergency Departments by blaming vacations taken by nurses and other front-line health care workers.

“AHS has never suggested to us that vacations are the problem,” said UNA President Heather Smith. “It’s offensive to suggest nurses are responsible for these problems by taking desperately needed vacations.”

Smith noted that health care employers have the power to cancel vacations in emergency situations like those in Boyle, Edson, St. Paul, Elk Point, Westlock, Rocky Mountain House, Fairview and Galahad that were mentioned in the Legislature.

A June 4 memorandum sent by AHS management to physicians and staff regarding the temporary 30-per-cent closing of 10 acute care beds in St. Paul states that the problem is “due to a high number of Registered Nurse (RN) and LPN (Licensed Practical Nurse) vacancies at the facility.”

“I am not aware of AHS ever saying vacations are the cause of these problems,” Smith said.

Responding to a question by David Shepherd in which the NDP health critic made reference to the government’s failure to keep rural hospitals and health centres staffed, Shandro accused the Opposition of hypocrisy, and then said “they know that it’s more difficult in the summer months, when people take vacations.”

Shepherd responded: “This minister is still at war with doctors, planning to fire 11,000 front-line health care workers and more than 700 nurses the moment the pandemic is over, can the minister promise these communities that there will be no more bed closures on his watch? Yes or no?”

Despite the delay caused by the COVID-19 pandemic, AHS has made it clear to UNA in writing on several occasions that it intends to proceed, on the instructions of the government, with the elimination of 500 full-time-equivalent positions it disclosed to the union in 2019 and 2020. UNA estimates that will be the equivalent of about 750 actual Registered Nurses’ and Registered Psychiatric Nurses’ jobs.

Staff shortages caused by intentional underfunding and attempts to find cost efficiencies at the expense of quality care are causing similar problems in every Canadian jurisdiction.

An emergency resolution passed by the online biennial convention of the Canadian Federation of Nurses Unions this morning called on nurses’ organizations “to pressure governments to address the health human resources crisis facing nurses and other health care workers through national initiatives that support health human resources planning at the provincial and territorial levels, such as the creation of a federal health workforce agency.”

The resolution also calls for continued efforts to demand Ottawa “provide urgent funding to the provinces and territories to hire additional nurses and health care workers, and to fund retention and recruitment initiatives to stem the disturbingly high flow of workers out of the sector.”