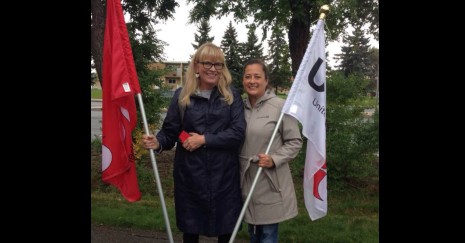 Long-time United Nurses of Alberta activist Karen Kuprys has been elected as secretary-treasurer of the Alberta Federation of Labour.

The AFL’s 52nd annual convention – conducted this year remotely over the Internet – also saw the re-election of President Gil McGowan during the final morning of the three-day event, on May 15.

“I’m personally incredibly proud that such an experienced UNA member has been elected to the position of secretary treasurer of the Alberta Federation of Labour,” said UNA President Heather Smith. “It speaks volumes about Karen’s ability to speak to all workers, not just with and on behalf of nurses.”

“I am incredibly humbled to be elected to serve as your next AFL Secretary Treasurer,” Kuprys said after the votes were tallied. “I have deep respect for all of our members and our labour movement, I will continue to work hard to deserve the trust you have placed in me.”

Smith congratulated both winners on their election, noting that Kuprys has been a key activist in UNA for 30 years and that in October 2020 she became the first recipient of UNA’s new annual Bread & Roses Award for her contributions to the union.

Kuprys is a member of UNA Local 154 at the Youville Home continuing-care facility in St. Albert.

She and McGowan will each serve a two-year term.

Kuprys replaces Siobhan Vipond, the previous secretary-treasurer, who announced before the AFL’s 52nd annual convention that she planned to step down. Vipond, who served eight years in the post, is a candidate for the position of executive vice-president of the Canadian Labour Congress. The vote is scheduled to take place during this year’s virtual CLC convention, with the vote taking place at 3:30 p.m. on June 18.