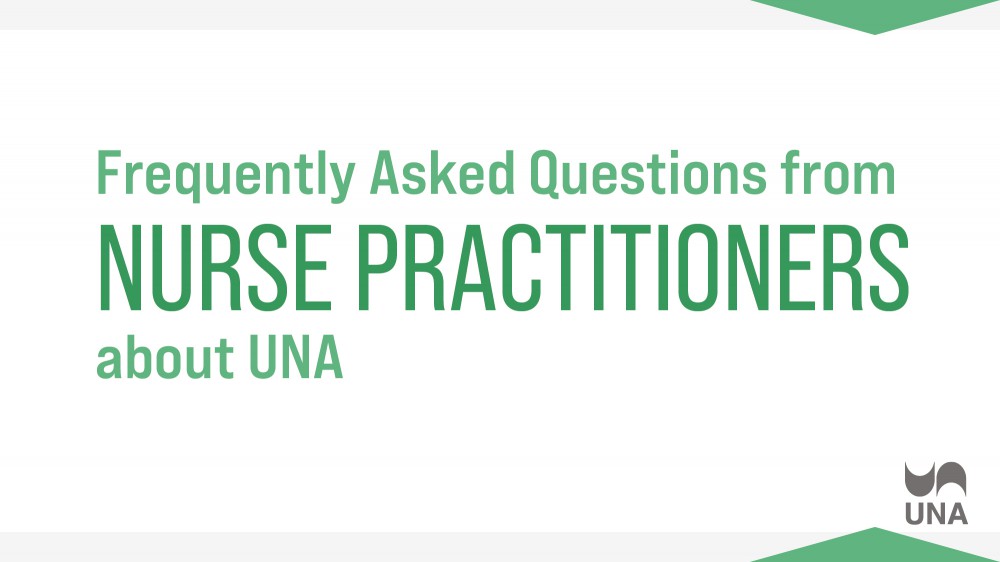 United Nurses of Alberta has received a number of questions from Nurse Practitioners about the union and what might happen if NPs decide to choose UNA as their bargaining agent. For more information, visit our Nurse Practitioners page or email np@una.ca.

Why are Nurse Practitioners in Alberta now able to join a union?

Do Alberta’s Nurse Practitioners have to unionize?

No. If the majority of NPs employed by a single employer do not want to unionize then they don’t have to.

Why does United Nurses of Alberta want to represent eligible Nurse Practitioners?

UNA believes that all groups of workers who want to be unionized should have the ability to do so. We also believe that the members of UNA have many shared interests with Nurse Practitioners and that our decades of experience representing Alberta nurses would benefit any NP employee groups that choose to unionize.

We strongly believe that it is up to the NPs to decide if they want to unionize, and, if so, to decide who would best represent them. UNA would be willing and interested to represent NPs if there is an interest by NPs for us to represent you.

Negotiations and contract administration and enforcement are complex and expensive undertakings. UNA has the infrastructure in place as well as the financial resources to support NPs through the process of certification and negotiating a collective agreement, with a team of more than 40 labour relations professionals, and the finance and IT teams necessary to do so.

United Nurses of Alberta has a proven track record of strongly representing its members and negotiating the best Collective Agreement provisions in the country.

What is the process for a union becoming the certified bargaining agent for a group of employees?

A union must apply to the Labour Relations Board to become the bargaining agent for a group of employees of an employer. The application must include evidence that at least 40 per cent of the employees of that employer in the bargaining unit support the application. Eligible NPs would be asked to sign membership cards or a petition saying that they want UNA to be their bargaining agent for their employer. Although a union may apply with 40 per cent support, it is UNA’s practice to not apply unless we know a majority of affected employees support the application.

If the application is found by the LRB to be in order then a secret ballot vote is held. If the majority of employees vote to choose the union then the Labour Relations Board issues a certificate, meaning that union now has the right to negotiate a collective agreement with the employer. Once the application is made, the certification process is typically resolved within 1 or 2 months. There is no way of being certain how long it would take to reach a first Collective Agreement.

Can a union be certified to represent all of Alberta’s Nurse Practitioners?

No. A union can only apply to the Labour Relations Board for a certificate to bargain on behalf of a group of employees for one employer at a time. Regardless of whether they are all publicly funded, Alberta Health Services, Covenant Health, and each approved nursing home are their own individual employers. Further, the “all Nurse Practitioners” bargaining unit does not apply everywhere. Some Nurse Practitioners are faculty members at Universities so their bargaining agent continues to be the applicable Faculty Association. The changes to the Regional Health Authority Collective Bargaining Regulation has no effect on that.

What about Nurse Practitioners working with Primary Care Networks?

Primary Care Networks do not fall within the functional bargaining unit created by the government, which only applies to Regional Health Authorities (AHS). The Labour Relations Board typically expands this policy to nursing homes but not PCNs or clinics. For NPs at a PCN to be unionized, the Labour Relations Board would likely require an “all employee unit” for each of those employers, which means that the union would apply to be certified to represent all eligible employees of the employer, which could include NPs, Registered Nurses, Registered Psychiatric Nurses, Licenced Practical Nurses, and other allied health workers.

What about self-employed Nurse Practitioners?

As unions represent employees, it is not possible to represent self-employed NPs. Most unions specifically state that only people “eligible for collective bargaining” are eligible for membership.

What role would Nurse Practitioners fill in negotiating a collective agreement? How would you balance the possibly conflicting desires of Registered Nurses and Registered Psychiatric Nurses versus NPs at the bargaining table?

In UNA, all collective agreements are negotiated by a negotiating committee made of up of members of the bargaining unit, with expert support from experienced UNA staff negotiators.  As NPs would be in their own bargaining unit, the negotiating committee would be exclusively NPs. The members of the bargaining unit determine their own proposals regarding salary, benefits, hours of work, and other terms and conditions of employment, and those members would make the final decision about their collective agreement.

NPs would be at a separate bargaining table and have a separate negotiating committee from Registered Nurses and Registered Psychiatric Nurses represented by UNA. Each committee would have their own mandate based on the direction of the members in their bargaining unit.

Only NPs would vote on whether or not to ratify a proposed collective agreement for NPs.

How is the UNA governed as a whole and what role would Nurse Practitioners play in that governance structure?

UNA has a structure of 172 Locals that are organized geographically into five districts. UNA also has four elected Executive Officers that are elected by delegates attending the provincial annual general meeting (AGM) and a board of district representatives that are elected from the districts.

There are quarterly meetings for the executive board and each district holds four meetings each year, along with the provincial AGM. As members, NPs would be eligible to run for positions as Local leaders, district representatives, and executive officers and active members could work with their Locals to attend the AGM.

Local decisions are made at the Local level and bargaining decisions are made by the member-based negotiating committees and members of the bargaining unit. The governance concerns addressed at the provincial level include updating our constitution and policies and procedures, approving the provincial budget, as well as managing changes such as new Locals being organized or Locals wanting to change their structure.

The issues voted on at the AGM are based on policy resolutions and constitutional amendments that are submitted by members. This allows all members the ability to raise issues of concern.

As advocates for health care and the general well-being of Albertans, we also discuss what actions we might take in order to support that. We have members from many diverse practice settings with different issues and concerns. As a collective voice, we support one another to champion and advocate for improvements.

What would my union dues pay for?

Union dues are currently 1.5% of gross earnings for all UNA members. The budget is approved by members at the AGM with robust opportunity for discussion.

The vast majority of the budget is allocated to negotiating, applying and enforcing the collective agreements of our members. We also provide funds to Locals in order to ensure they can support their Locals members. UNA is part of the broader labour movement so financially supports our affiliates, including the Alberta Federation of Labour, the Canadian Labour Congress, and the Canadian Federation of Nurses Unions. In our commitment to advancing the health and well-being of Albertans we also support organizations and causes that are consistent with that commitment such as Friends of Medicare, Parkland Institute, and Public Interest Alberta, as well as political action campaigns addressing those issues.

If Registered Nurses and Registered Psychiatric Nurses employed by Alberta Health Services and Covenant Health were to take job action, such as going on strike, would Nurse Practitioners be expected to participate?

No. As NPs would be in a separate bargaining unit, NPs would need to make a separate vote to go on strike if they chose to.

Can UNA and the Nurse Practitioner Association of Alberta coexist?

Yes. It is not our intent to replace the Nurse Practitioner Association of Alberta. In Saskatchewan, Manitoba, Ontario, Québec, New Brunswick, Nova Scotia, Newfoundland, and Prince Edward Island, Nurse Practitioners are in the Provincial Nurses’ Union, but also have their own Association.

How will UNA address practice issues for Nurse Practitioners?

If a Nurse Practitioner is involved in a disciplinary matter, who represents the NP?

There are two forms of discipline. One from the Employer and the other from CARNA.

You can request UNA to represent you at CARNA.

UNA would be your automatic representative with your Employer. Usually UNA Locals are involved in this process and the UNA Labour Relations Office assigned to a Local typically is involved. If we are not able to resolve the dispute, it can then go to arbitration. If it goes to arbitration, UNA has staff who can act as counsel and have access to outside legal resources.

Could the Nurse Practitioners decide they want funds from their dues to be allocated to a practice association?

Any allocation of dues money would have to be passed by delegates at a UNA annual general meeting.

NPs would make up less than 1% of the total union. Wouldn’t this make our position weaker as part of UNA?

No. Long-term care nurses are also in the minority in the province in terms of our membership and UNA has long championed and advocated for long-term care. Being a small part doesn’t mean your issues are not supported by a much larger voice.

How would UNA support Nurse Practitioners in getting appropriate compensation?

As a bargaining agent, UNA would have the obligation in law to negotiate with AHS to get NPs the best deal possible. UNA has a long and successful history bargaining excellent contracts. We believe strongly NPs would be better off represented by an experienced union like UNA.

Should Nurse Practitioners be worried about punitive action by their employer?

No. However, you should not discuss unionization on employer paid time.

What are the next steps?

If NPs express interest in joining UNA and willingness to assist as we go forward, UNA will work hard to support NPs. If not, we will respect that choice. The ball is now in your court!

Anyone interested in helping Alberta’s NPs join UNA should e-mail NP@una.ca and let us know.