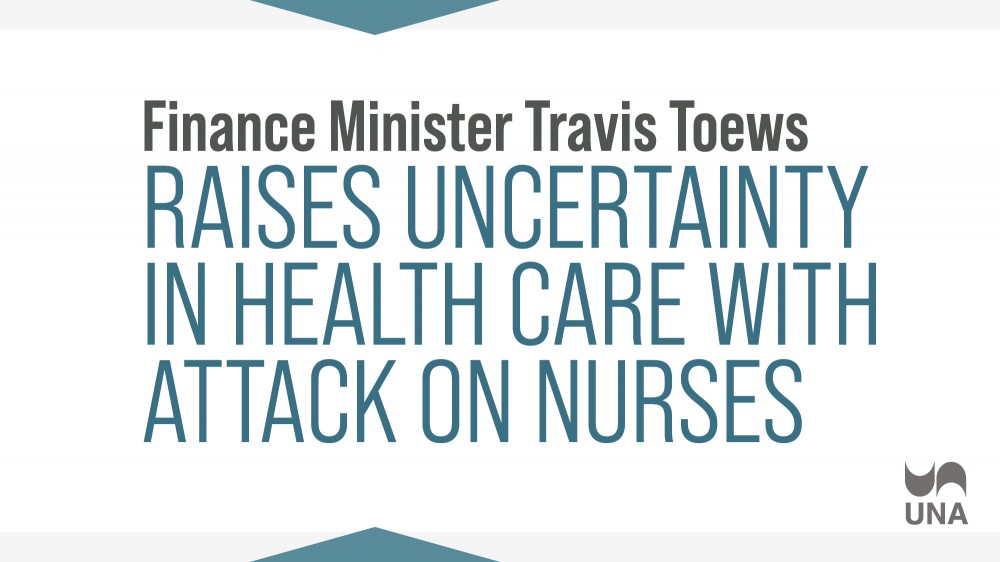 “
Mr. Toews needs to tone down the rhetoric and stop insulting the group of workers who are keeping the health care system running through this crisis. — David Harrigan, UNA Director of Labour Relations
”

Alberta Finance Minister Travis Toews is misleading Albertans by claiming in a statement on health care union bargaining this afternoon that United Nurses of Alberta is seeking “indefinite job security” and “rejecting stability” in the midst of the coronavirus pandemic.

“By insulting Alberta nurses and refusing to postpone a government plan to lay off at least 750 nurses until after a new collective agreement is in place, Mr. Toews is generating considerable uncertainty in the health care system,” said UNA Labour Relations Director David Harrigan.

“To do this on the day Alberta reported its highest number of new COVID-19 cases since the onset of the pandemic is almost incomprehensible,” Harrigan added.

“It is simply untrue that UNA is seeking ‘indefinite job security,’” he emphasized. “We proposed that the current no-layoff letter of understanding continue until a new collective agreement is reached.”

In an email to UNA earlier today, Harrigan said, AHS’s chief negotiator specifically rejected the union’s proposal there would be no layoffs while negotiations continue.

In his statement, the finance minister accused nurses of trying to take advantage of the crisis, “playing games with media,” and making an “overreaching and disingenuous demand for indefinite job security.”

“Mr. Toews needs to tone down the rhetoric and stop insulting the group of workers who are keeping the health care system running through this crisis,” Harrigan said.

The government’s announcement a year ago it intended to lay off 750 nurses this year, and more in future years, had already created enormous uncertainty before the pandemic began, he said.

“It’s hard to believe this doesn’t mean the government plans to go ahead and lay off nurses as soon as it can get away with it,” Harrigan said. “I don’t have to tell Albertans that ‘stability’ doesn’t look like out-of-work nurses, short staffed hospitals and burnt out health care workers in the middle of a pandemic.”

“The belligerent tone of the minister’s statement is extremely unhelpful under the circumstances when we should all be pulling together for the good of Albertans,” Harrigan stated.

“We suspect the real reason for the government’s strong desire to postpone bargaining until next year is because they don’t want to have to tell us or the public their real layoff plans yet,” Harrigan concluded, noting that once negotiations commence the employer is required by law to advise the union of any plans likely to be implemented.