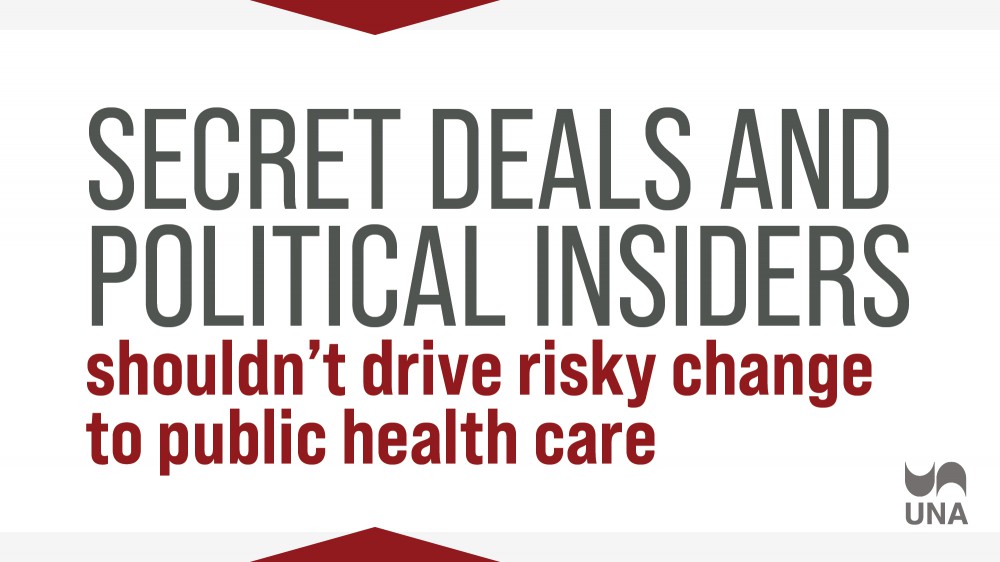 “
“It’s no coincidence the UCP passed Bill 32 to try to silence unions from speaking out about the dangers of privatizing health care at the precise time they are going full steam ahead with privatization.” — UNA First Vice-President Danielle Larivee
”

The plan to build a $200-million private surgical hospital in Edmonton revealed this morning by the CBC is not a small-scale increase in the number of Alberta’s existing small private surgical clinics, Larivee said. “This would be a huge, ambitious leap into American-style two-tier health care.”

The alleged justification for this move to privatize our health care system is to reduce surgical wait times, but Larivee said this is a manufactured crisis created through chronic underfunding of public health care in Alberta. “We should be investing the dollars the government wants to use for this project into public surgeries instead,” she said. “That will cost Albertans less and provide better health care.”

CBC Edmonton’s investigative reporting team revealed that a group of orthopedic surgeons, a developer and lobbyists with connections to the government have gained tentative political support from Health Minister Tyler Shandro for the proposal to build and operate what would be the largest private, contracted surgical hospital in Alberta’s history.

The hospital would perform all non-emergency orthopedic surgical procedures in the Edmonton region, as many as 10,000 operations each year, under contract to the government, the CBC reported.

The problems with proposals like this are well understood, Larivee said. “Privatized facilities like this have been shown time and again to cost more and result in longer wait times as surgeons exit the public system to practice for-profit medicine,” she explained.

“This is part of an ongoing effort by this government to move our health care system toward credit card medicine instead of medicare for all. All you have to do is look at the response to COVID-19 in the United States to see the flaws with privatized health care.”

“It’s shocking this government continues to try to undermine public health care under cover of the coronavirus pandemic,” Larivee added.

Details in the CBC story included a contract intended to financially penalize taxpayers if a future government brought public health care services back into the public sector and a plan to attempt to staff the hospital with non-union nurses and other health care workers, she noted.

“Make no mistake, the owners of this facility should know UNA will take action to ensure that their employees are given the option to be represented by our union,” Larivee stated.

“It’s no coincidence the UCP passed Bill 32 to try to silence unions from speaking out about the dangers of privatizing health care at the precise time they are going full steam ahead with privatization,” she said.

She noted that Alberta has seen schemes like this go awry before. When a private, for-profit orthopedic hospital in Calgary, the Health Resource Centre, went broke in 2010, “it had to be bailed out with public dollars with the public health care system left to clean up the mess.”