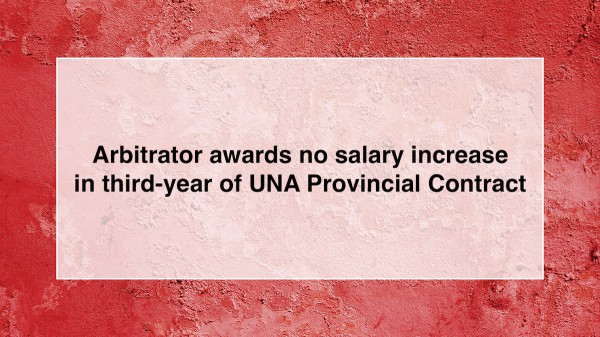 An Arbitration Board has issued a ruling awarding United Nurses of Alberta members no salary increase in the third-year of the Provincial Collective Agreement set to expire on March 31, 2020.

UNA had asked for a 3-per cent increase and the employer was directed by the provincial government to ask for a 3-per cent wage rollback. UNA members received no salary increases in the first or second years of the contract.

The Arbitration Board, which was chaired by arbitrator David Jones and included employer nominee Lynn Michele Angotti and union nominee David Williams, held hearings in Edmonton on Dec. 4 and 5, 2019.

At the hearings, UNA argued that nurses' income has not kept pace with inflation over the course of the past three Provincial Collective Agreements and that, while nurses are the highest paid in the country, the same is true for virtually any other occupation or profession in Alberta compared to other provinces.

In his judgement, Jones wrote that “no change to wage rates is justified in the third year of the current collective agreement, particularly given the prevailing general economic conditions in the province, as well as the current comparative continuity and stability of nurses’ employment and the absence of any relevant other public sector settlements that would indicate either an increase or a decrease to salaries.”

Jones wrote that he wished to “emphasize again that I have rejected any suggestion that the Employers do not have the ability to increase wages. The issue is not whether the provincial government could (or should) increase taxes in order to increase salaries in the public sector. I also recognize the public interest in maintaining quality public institutions. However, the decision about how to balance these two objectives is political, the responsibility of the government, and not the function of an interest arbitration.”

He also noted that “the parties will very shortly be embarking on negotiating the next collective agreement, during which they can test either by agreement or after industrial action whether it would be appropriate to put in place any different result.”

UNA is scheduled to begin negotiations with the employer for the next Provincial Collective Agreement on Jan. 14 and 15, 2020 in Edmonton.